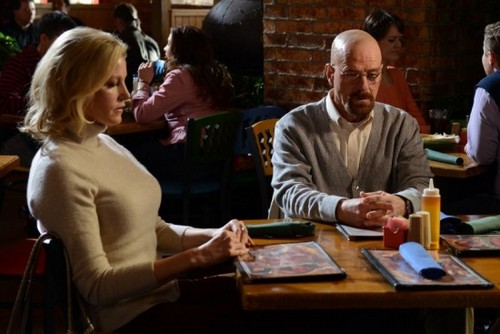 Tonight on AMC BREAKING BAD continues with another exciting episode.  Tonight’s episode is called, “Confessions”  and on tonight’s show Walt and Skyler try to deal with an unexpected demand.  Did you watch last week’s episode?  If you want to catch up before tonight’s show, we have a full and detailed recap, right here for you!

On last week’s show Jesse continued to struggle with his guilt.  Skylar met with Hank in a diner and he begged Skylar to give up Walt, she refused. Hank let the cat out of the bag that Walters cancer was back.  Skylar wanted a lawyer but Hank tells her he does not understand why she wants one, that did not go down well with Skylar.  Hanks told his wife Marie what he knew and she tried to convince Skylar to give Walter up. Walter headed over to Saul to get his money.  Walter realized the only evidence is his mountain of money.

On tonight’s show Jesse decides to make a big change in his life, while Walt and Skyler try to deal with an unexpected demand. (Written by Gennifer Hutchison. Directed by Michael Slovis.)

Celeb Dirty Laundry will be covering all the drama of this final season and you don’t want to miss this highly acclaimed television show featuring these top-notch actors. Prepare for the final Breaking Bad sprint to the finish line and join us each week for our live recap of Breaking Bad at 8PM EST!  If you are curious what is going to happen tonight we have a sneak peek video and some spoilers for your enjoyment right here.

RECAP: Todd calls Walter and tells him he has something to tell him about the change in management and that he should call him for the details. Todd is talking to these two guys in a diner about what he did with Walter and Jesse at the train incident; he mentions how he jumped off the top when it started moving. Todd mentions how nobody knew that they stole from the train and that it was the perfect train heist. The two ask Todd if he’s ready to cook and Todd tells them that he has this.

All three of them leave and are now on the road to New Mexico.

We see the whole interrogation in Jesse’s point of view and how he just heard nothing; Hank then walks into the room. He shuts off the camera filming and asks how Jesse is doing, he then offers to help him out. He asks about Heisenburg and tells him he knows that it’s his brother in law Walter, he tells Jesse he’s lucky and that if he helps him out then he will have Jesse go free. Plus, he says that Jesse must be in some trouble and that they are not getting along. Jesse says eat me and tells him to beat it out of him. Hank leans in and says he must have done a number on him, he says happy people don’t go around throwing millions of dollars away. Hank then tells him that his own brother in law lied to him for so long and used him, he wants Jesse’s help to put him away.

Jesse then tells Hank that he doesn’t want to talk; all of a sudden Saul walks in and tells them all to leave. Saul asks Jesse what is wrong with him throwing out all the money out his window, he asks what he said to Hank. Jesse tells him to chill.

Walter then says that he deserves to know what’s happening, he tells Junior he passed out because his cancer is back. Junior asks what now and Walter tells him they should just go on like always; he tells him it is hard but he did beat it once before. He tells Junior it would really help him out if they all stay positive, he tells him to go over to Hank’s place but Junior refuses and says he will be staying. Hank comes home and Marie knows something is wrong, he says he hasn’t told his partners about Walter and Marie believes that he should do so as soon as possible; Hank tells her not to tell him how to do his job.

Walter is in his bedroom and has a camera pointing at him, he says that his name is Walter Heartwell White and where he lives; he mentions that this is his confession.

Walter and Skyler are sitting in a restaurant together being very quiet, Walter says they are here and in walks both Hank and Marie. Hank and Marie sit down, Walter thanks them for coming. Their waiter comes in and interrupts Walter and he tells him they are fine, Walter then says there is nothing to confess. Walter says that their concern is misplaced and that trying to lure Junior to their house was wrong. He tells them to leave their children out of it, Hank says Junior will find out about it when he kicks in his front door and arrests him. The waiter is back with water and gives them all water, nobody answers and he leaves. Marie asks how Skyler can sit there and listen to all this, Skyler tells them that what he did is in the past and that there is nothing to accomplish. Walter tells them that Junior already knows about his cancer and it’s not right to throw this on him as well, Walter asks what he can do to solve all this. Marie says that he should just die, Hank then says that he wont be getting off that easily and then mentions the same goes to Skyler if she stays with him. Hank tells him to be a man and to admit what he has done. Walter gets up from the table and tells Skyler they should go, he hands Hank a CD. Hank watches the CD and sees Walter tell on the screen which says that he is probably dead, it’s a whole confession that says Hank is the mastermind behind all of the meth; trying to use Walter as a scapegoat. Marie and Hank watch it shocked, he basically blames Hank for everything that has happened and how he used Walter and threatened his family.

Walter says that Hank was the one who killed Gustavo Fring, he says how he made the bomb and everything for the hit. Walter also mentions how Hank took his kids to keep him under control, Walter mentions how he planned to quit but showed off a wound on his face that was done to him; he then says how making this video to show everyone who Hank really is.

Marie asks who he would show that too, Hank mentions it is nothing but a threat. Hank asks what Walter is talking about when mention paying his medical bills when he got injured, Hank then figures out that the money was Walter’s. Hank then can’t believe it, he says that Walter practically killed him. Marie asks him what they should do. We now see Jesse and Saul standing around in the desert together; a spider is walking up to Jesse. A car is driving up to them and Walter comes out; he walks over to their car and checks for a tracking device. Walter asks Jesse what Hank knows, Jesse tells him that Hank knows he’s Heisenburg. He mentions how Hank wants him to tell him about everything Walter did; he then mentions how none of the DEA knows about it. Walter tells Saul to go take a walk, Walter asks if there is a way he can help Jesse. He tells him it is time for a change, he tells him that he should get out of town and not look back. He mentions how a man can give him a new identity and a brand new life.; believing it would be good for Jesse.

He then tells Jesse that he should find a job that he likes and maybe start a family of his own, Walter then mentions that he would love to change places with Jesse since he’s young and has man opportunities. Jesse asks him for once to stop working him, he tells him to stop the whole concerned dad thing. He believes that Walter needs him gone because of his brother who wont let go, he then asks Walter to ask him for a favor or to kill him like he did to Mike. He believes that’s why they are out there in case he says no, he asks Walter to tell him he needs this. Walter walks up to him and gives him a hug.

Walter is working at the car wash and goes to see Skyler; he tells her he’s got his chemo soon and wonders if she will take the register for him. She isn’t answering but Walter tells her it worked and that they are fine. Hank is looking through a bunch of papers and Ramirez comes in and asks him what’s going on since he’s following Jesse, Hank then says that he should take him off. Ramirez leaves and Hank looks frustrated, he leaves his office and then tells his receptionist to reschedule a meeting he had. Saul asks Jesse if there is anyone he wants to say goodbye too, Saul calls the number to get Jesse a new life. The call is done and Saul gives him some money for the life change and some extra money for his new life. Jesse lights up a joint in his office and Saul asks him to stop it or the guy wont except him high. Jesse puts it out and Saul asks for the dope, Jesse just puts it in his pocket. Saul goes out to get a bag for the cash, Jesse starts bagging the money and gives Jesse a phone with Hello Kitty on it. Saul tells him to sit and wait for the guy who will pick him up, Saul tells him Florida would be nice to go for his new life; Jesse asks about Alaska and believes it’s good. Saul tells Jesse to take care and shakes his hand, Jesse is standing around waiting for this mystery man. He starts feeling around and notices something with his cigarettes; he picks up his bag and walks away from the van.

Jesse walks into Saul’s office and beats the hell out of him, Jesse takes out a gun and mentions how the ricen cigarette was stolen from him; he noticed how Walter poisoned Brock. Saul then confesses how he took the cigarette and never knew what he was going to do, Jesse goes over and takes his keys and walks out. Saul calls Walter and tells him that they have a big problem. Walter pulls up to the car wash and looks really anxious, he then mentions how the other day there was a problem with the soda machine and will go check it out. Walter opens it up and reaches in to grab a gun, it’s dusty put completely loaded. He mentions he has to get a prescription and walks out, Jesse drives up to Walter’s house and takes a bunch of gasoline; he kicks down the door and pours it all over the house.