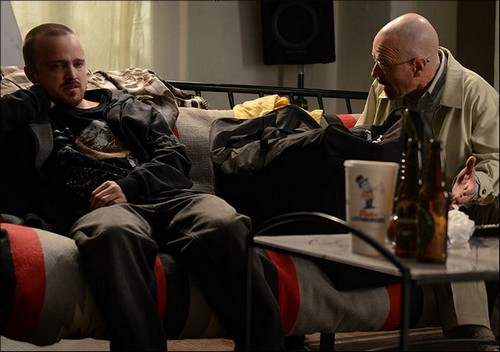 Tonight’s episode of BREAKING BAD was crazy!  Jesse is out of control he realized that Walter was the devil and it looks like he was going after Walter.  If you are curious about next week’s episode we have managed to get our hands on a sneak peek video and a few spoilers to whet your appetite for next week’s episode 12 “Rabid Dog.”

On tonight’s episode Hank tried to get information from Jesse about Walt.  He told Jesse he knew everything and offered to save Jesse.  While Hank was trying to grill Jesse, Saul showed up and threw him out. Jesse and Walt met up and Jesse thought Walt was there to kill him, but Walt suggested Jesse start a new life.  In the end Jesse agree to start again somewhere else.  Saul was the one who was suppose to set up Jesse’s new identity and it looked like it was all going to happen.  That is until Jesse’s memory was jogged and he put two and two together and realized that Walt was responsible for Brock being poison.  Walter made a crazy confession on tonight’s show, so much happen if you missed it, head over to read our full and detailed recap here!

Spoiler alert: If you’re one of those people who doesn’t like spoilers, stop reading now! We have some juicy spoilers for you about the season 5 episode 12 of AMC’s “Breaking Bad”

Official Showtime synopsis of next week’s episode: “An unusual strategy starts to bear fruit, while plans are set in motion that could change everything.” (Written by Sam Catlin.)

On next week’s show now that Jessie has realized that Walt was responsible for Brock’s being poisoned and he was furious.  He now realizes that Walter is the devil.  Walt knows that Jessie is coming after him and Skylar lets him know he has to deal with it.  Jesse is probably the, “rabid dog” from the title of next week’s episode.

Meanwhile Marie is upset about the video that Walter made and goes to see Skylar.  She tells Marie that there is nothing to be done, Walt has won.

Meanwhile Walt is having problems with his  son Walter Jr.  Junior is frustrated with Walter and all his lies.  He would like to see his father telling the truth for one.  Good Luck with that!

Breaking Bad episode 12, “Rabid Dog” airs on AMC on September 1st, 2012.   Check out the preview video below of episode 11 and let us know in the comments below what you think!  Are you enjoying season 5 of Breaking Bad?