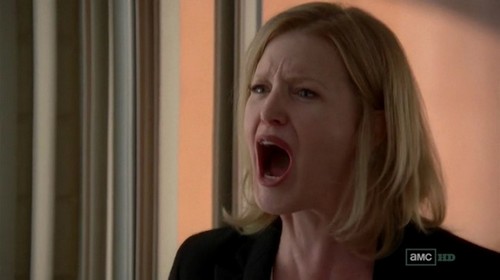 Just as I watched the premiere for the last eight episodes of the fifth season for Breaking Bad I finally could confirm my theory from watching the previous episodes in the fifth season leading up to it. As a huge fan of Breaking Bad I’ve realized a lot of foreshadowing that the show has been doing lately; hinting out possible deaths of main characters. In this episode 10 of season 5 that we’ll see Sunday don’t be surprised if Skyler dies.  Yes, we expect to see Walter White kill his own dear wife!

I only realized this after having watching a lot of the episodes over again. Now I realize that if you pay attention to some of the things Walter White has been doing throughout the seasons they lead to some shocking conclusions.

After a while Walter White basically kills everyone in the show or totally ruins their life; he also borrows some sort of traits of his victims. From what I’ve seen it can either be personality or character traits, mannerisms or even just eccentricities that the person had.

I went to look back on some of the previous episodes to see how differently Walter acts after he kills a person and I couldn’t believe how noticeable these copied actions were after you actually kept an eye out for these little actions and comparing them to previous scenes.  Check out Double Aardvark Media to read a detailed analysis of Walter’s creepy and subtle absorption of his victim’s personae – learn why we think he does in Skyler.