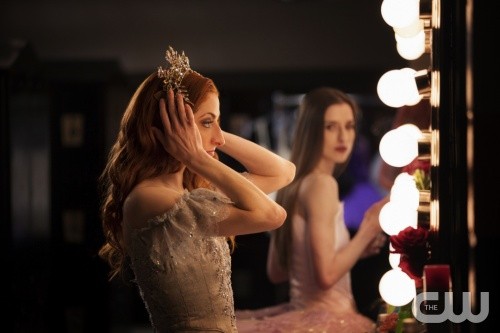 Tonight on the CW BREAKING POINTE continues with their second season finale called, “The Story Of Us.”  On tonight’s season finale the dancers head to in Los Angeles.  Did you watch last week’s show?  We did and we recapped it for you, right here.

On last week’s show with closing night of “Cinderella” just around the corner, the dancers continued to give it all they’ve got. Allison found herself getting closer to Rex, while Beckanne and Chase enjoyed the last moments of what may be their last performance together at Ballet West. Joshua’s mom came out to visit, and Adam threw a closing night party for the dancers.

On tonight’s show with closing night behind them, the dancers head to Los Angeles for a fundraiser. Christiana and Christopher make a tough decision about their future while Ian says goodbye to Ballet West. After performing a passionate piece together, Allison and Rex find themselves getting closer. Meanwhile, the dancers throw a bonfire and let loose on their last night in Los Angeles.

RECAP: The dancers chosen to go to LA have arrived and are really happy to be there, although some are looking forward to the down time and some to the dance.

At the estate in Malibu, Ronnie cannot believe how posh it is. Adam’s goal is to get Bally West out to LA as a major company and bring in donors who can really help the company grow.

Beckanne approaches Adam and tells him that she is back on track and ready for anything he throws her way, he could be happier. This is the first time that Beckanne will be showcasing herself as a soloist.

Allison is speaking to Christiana and the problems she is having with Chris being there. Christiana admits that it is tough and it is such a huge honor to be there, but her heart is really not into it. Christiana is ready to work hard, but her personal life is nothing that she would celebrate right now.

It is time for the first performance and it is a ballroom one with Christiana and Rex who do a fabulous job. Next is Beckanne dancing as a fiery gypsy girl named Esmerelda. Ronnie loved watching Beckanne and felt she looked really sexy. Rex and Allison is next and they are telling a story of a relationship, Allison wishes it was in real life but Allison is afraid to tell him how she feels because of being rejected.

It is time for a cocktail party; the dancers enjoy getting all dressed up and mingling with the possible future donors. Josh approaches Adam and tells him that she wants to be one of his top dancers one day. Then Adam tells Allison that her dance with Rex was so intimate that it was like intruding on something private. Allison asks Adam if they can speak tomorrow, she wants to talk to him about retiring.

Christiana has her bag packed, she wants to go home and do what she has to do although Allison wish she had stayed longer. Chris wants Christiana to be happy and with that happening, he knows that he has to let her go. Christiana doesn’t know what the future holds, but right now she just feel like she has to put one foot in front of the other.

Allison sits down with Rex and thanks him for not abandoning her. Rex tells her that she belongs there and gives her a peck on the cheek, then she gives him a hug.

Rex goes out and speaks to Ronnie, tells him that Allison wanted to leave Ballet West and feels stuck between a rock and a hard place. Rex says they used to be together, they are not any more but it is undeniable that they are great friends. Ronnie tells him to just let it happen. Silver walks in and joins them, then more people come in and all of a sudden, everyone is there. Ronnie is so excited to be with everyone and announces that in nine more days he gets to take his boot off and return to dancing.

Allison is ready to sit with Adam and give her decision about staying and leaving, even though he knows nothing about it. Allison tells Adam that she didn’t think at all that he was going to promote her and she was going to retire. Allison tells him that she is so grateful and it is very important that she hands him herself the papers, she is going to accept the offer and be a soloist with Ballet West; Adam is thrilled.

Allison and Rex are down at the beach snuggling while Chris is sitting down in the sand looking quite depressed. Silver goes to sit with Chris and talks to him, he says he just didn’t know that his marriage was going to fail and it is really sad. Silver thinks the way Chris is handling things is awesome. While Rex thinks that if Allison wants to be with him, it is not going to happen soon. Some of the dancers decide to go swimming, they strip down to their underwear and head on in.

Adam looks back on the year they have had and can’t believe what they have been through. Ballet can be vicious, the best dancers are usually the most tortured, they destroy their bodies and usually they do it alone, every step of the way…but ballet is a part of their lives and when they are on stage nothing else matters.