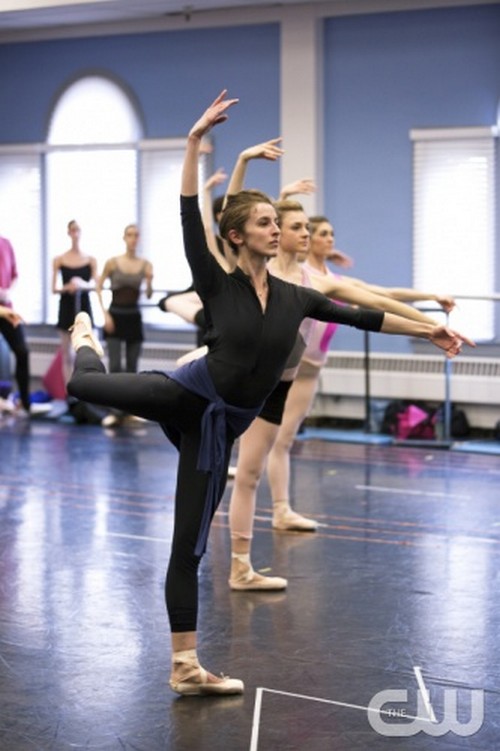 Tonight on the CW BREAKING POINTE continues with a new episode called, “This Ballet Is Cursed.”  On tonight’s show Rex battles a foot injury; Jonathan makes Allison anxious.  Did you watch last week’s show?  We did and we recapped it for you, right here.

On last week’s show with contract renewals over, the dancers focused their attention on the upcoming opening night of “Cinderella.” When Allison didn’t get the support she needs from Jonathan, she turns to Rex. Meanwhile, Beckanne returned to her former ballet school in Philadelphia to seek guidance from her mentors. Amidst the pressure building in both her personal and professional life, Christiana suffered an injury that puts everyone on edge.

On tonight’s show plagued by mishaps and injuries, the dancers find themselves rattled after a disastrous dress rehearsal. Ian finds himself facing every dancer’s worst nightmare while Allison grows anxious wondering if Jonathan will show up to the performance. Rex continues to struggle with the foot injury that has been bothering him all season, and Christiana puts on a brave face for opening night.

RECAP: Allison has asked Jonathan to come and watch her dance, but she is not sure that he will come. Ian did not get a contract, but needs to focus on what e has to do. Zach has so much anxiety, this is the first time he is featured. Rex finds that the pressure is the most that he has ever experienced. Christiana hopes her ankle doesn’t prevent her from performing; she is frustrated that Christopher is talking to her at work, they promised they wouldn’t.

Th first couple of days on stage are crazy because of the lighting and costumes; everyone was excited, but now everyone is stressed out. Rex has to prove himself to Adam and it is a lot of pressure.

Allison is still worried that Jonathan will not come to watch her dance, Christiana tries to reassure her that he will come. Allison is trying to put it out of her mind, she doesn’t need the distraction.

It’s time for the dress rehearsal, this is where they find the weak spots in production. It is nerve racking because the dancers are dealing with head pieces, lighting and the new costumes.

Joshua’s timing is off and he cracks Ian’s thumb, but injuries are just part of the business. Then Emily slips and falls and the rehearsal temporarily stops. Rex and Allison miss a lift, there was no hiding it. Dress rehearsal was a disaster, Adam cannot believe how much there is to do.

There is one day to go before opening night and Rex is having trouble with the lifts. Ian’s girlfriend, Allyson is in the audience. Ian has to lift some dancers and he needs to figure it out with his broken thumb. Ian is so upset, he is told to take a day to rest and it sucks.

It is opening night; Beckanne doesn’t feel ready, Josh is ready to get to is, Rex’s foot is cramping up but he is mentally ready and Ronnie is disappointed that he is injured and cannot perform.

Christiana’s nerves are at an all time high, but she is ready. Allison thinks Christiana’s anxiety all has to do with what is going on at home. Allison calls her mom to ask if she heard from Jonathan, like is going to be there to surprise her; but he didn’t mention anything to his mother. Allison feels like her relationship with Jonathan is on the line if he doesn’t show up.

Zach is so excited to finally be able to be in front of a live audience, he feels like a star. Allison looks out into the audience where Jonathan should be sitting, it is still empty.

Beckanne has beautiful feet, but Adam thinks they are a little floppy and she needs to work on it. Allison is on stage and is a little distracted wondering if Jonathan is in the audience. During a break, Allison looks out into the audience and he is not there.

Zach’s wig fell off during his performance and Adam calls it sloppy, but he is impressed with how Zach handled it.

Christiana didn’t feel comfortable dancing and is upset with herself because her personal life is distracting her. She is on pointe and falls off, which is no excuse.

Rex is backstage with Christiana and wants to keep practicing one of the lifts because he is worried about it. They are on stage and they nail the lift, but Rex cannot feel the strength in his foot. Christiana needs to concentrate more on her performance and not what is going on around her.

The first performance is over, Jonathan is on the phone with Allison and she tells him that she didn’t like not having anybody out there that she knew. Allison is disappointed, but she thinks that Jonathan is simply afraid to be around Rex. Christiane walks in and Allison pours her heart out, she says she can see where Jonathan is coming from but to have a successful relationship he needs to get over this. Allison knows that this place has bad memories for Jonathan, but even though he is hurt, he needs to get over it. Christiane tells Allison that the people who want to be with her are going to be there and he should have been there this weekend.