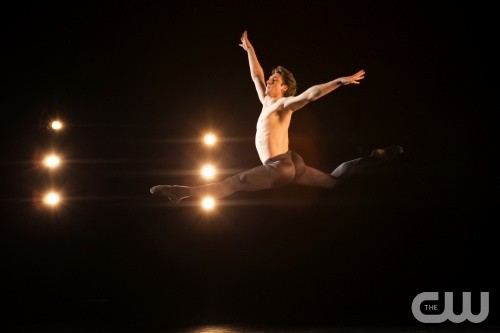 Tonight on the CW BREAKING POINTE continues with a new episode called, “It’s Time To Face The Music.”  On tonight’s showAdam throws a closing night party for the dancers.  Did you watch last week’s show?  We did and we recapped it for you, right here.

On last week’s show plagued by mishaps and injuries, the dancers found themselves rattled after a disastrous dress rehearsal. Ian found himself facing every dancer’s worst nightmare while Allison grew anxious wondering if Jonathan would show up to the performance. Rex continued to struggle with the foot injury that has been bothering him all season, and Christiana puts on a brave face for opening night.

With closing night of “Cinderella” just around the corner, the dancers continue to give it all they’ve got. Allison finds herself getting closer to Rex, while Beckanne and Chase enjoy the last moments of what may be their last performance together at Ballet West. Joshua’s mom comes out to visit, and Adam throws a closing night party for the dancers.

RECAP: Cinderella has been running for two weeks and Zach’s back is killing him; Rex knows that he keeps to keep pushing while Allison feels at the end of her rope with Jonathan. Chris is lost and it is taking everything he has to bring it on the stage. Adam knows that ticket sales only covers about 40% of their costs, so they need to raise money to be able to continue performing.

It is practice time, Christina finds out that there is a lot of stress before closing time. Sayaka slips just before closing night and Adam is concerned because the performance has to be perfect.

Beckanne is so happy that her friend Katie is there for closing night; she tells her that she doesn’t want to lose Chase.

Josh is on the phone with his mom, he is so excited that she is going to be there for closing night. Josh doesn’t take anything for granted because he had a strict upbringing. Josh found it was a rough season because he lost the opportunity to do Napoleon to Zach.

It is the morning of closing night, Rex is really nervous because he hasn’t been promoted yet. Allison feels like her personal life is falling apart, but she knows that she needs to keep it together for closing night.

Josh grew up in a lot of bad neighborhoods, but somehow when he found ballet everything changed and he credits everything to his mom because he was rich, spiritually.

Adam goes around to all the dancers and tries to give them some last minute tips. The show is about to begin and Christiana wants this to be her best performance ever. Beckanne can’t control Chase’s future, but if he leaves, she is determined to just deal with it. Josh is so happy that his mother is in the audience and that is all that he sees tonight. Allison is thinking about her last performance and wants it to be the best ever; but the screen in front of her is having trouble moving up. Allison starts to dance anyway and she did not freak out. Allison really wanted to do well because Rex was on the side of the stage watching. After the show, Zach admits to Allison that he saved it, he got the screen to go up. Zach knows what he is up against, he needs to go out there and perform like he is not injured. Adam is so proud of his dancers, everything goes perfect and the audience loved it.

Everyone is back stage, the dancers have changed and their families are there to congratulate them. Josh’s mom is so touched by his performance and he thanks her for making him take a ballet class.

Now that Cinderella is over Ballet West is having a party to celebrate everyone’s hard work. Adam congratulates everyone and tells them that he couldn’t be more proud. Barbara is a former dancer and is now a philanthropist; she gives Adam a donation of $100,000.00. Christiana knows that now she has to turn her attention to her personal life and it’s not going to be fun.

Beckanne gets some catch up time with Jason and he tells her that he got a contract and he is staying; they are together next year. Beckanne is so happy that Chase chose to stay with her and dance in Ballet West.

Chris is really stressed out, he has spent a lot of time by himself; he feels like he is dying of a broken heart.

Zack goes in to meet with Adam who tells him that he didn’t think he was going to make it and he has been an absolute pain in the ass. Then Adam tells him that he is getting a promotion to first soloist because he has always produced for him.  Zack’s goal is to be principal soloist so he intends to keep pushing.

Christiana has moved into her own apartment ad she is ready to take a look at her life, Allison tells her that she is doing the right thing. Christiana finds the worst thing is to wake up and realize you don’t recognize the person you are with and more importantly, you don’t recognize yourself, then she thinks you need to do something.

Adam has called a lot of the dancers into the studio and Ronnie is curious what it is all about. Adam tells the dancers that he loves they way everyone went with Cinderella and there is an opportunity to go to LA to do a fund raiser in a beautiful home on the water. Adam wants to show people in LA what Ballet West is all about and because everyone has worked so hard, Adam is giving them an extra day in LA to do anything they want to.