Britney Spear’s Las Vegas Show May Be A Hit! (VIDEO) 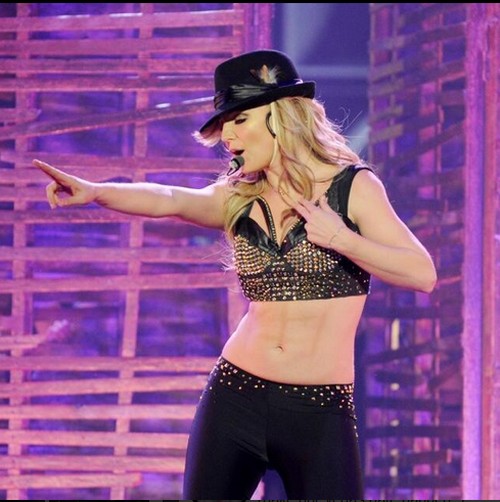 “B-girl ain’t lost the beat/jumped over drama and I landed on my feet.” If you know these lyrics, you are a true fan. Britney Spears has definitely shown she has landed on her feet with the debut of her new Vegas show at Planet Hollywood Resort and Casino. “Britney: Piece of Me” opened to a sold out audience full of fans and celebrities. And so far, the critics are giving the show positive reviews.

All eyes were on Britney last night as she performed 24 of her biggest hits in 90 minutes. There were few things on everyone’s mind when Britney’s Vegas residency was first announced. Can she pull this off? Can she still dance? Will she sing live?

She proved she still got the moves. Britney has always been known for her dancing ability. Her music videos and live performances were always filled with intricate dance routines. With 14 young, back-up dancers, Britney kept up with the physically fit dancers. She has stated that this is most dancing she’s ever done in her career. The now 32-year-old and mother of two has slacked in the dancing department over the past few years, but she kicked it up a notch for her Vegas debut.

“While she’s not the dancer she once was, she still got the crowd cheering with every impressive piece of choreography she did pull off. Yes, she has her moments,” wrote a reporter for TooFab.com

Britney also gave amazing vocals during her opening night. That’s because she lip-synched most of the show. Manger, Larry Rudolph and Britney both claimed she would be singing live for her Vegas shows. But, did anyone really think this was going to happen? As a longtime fan, I don’t think she’s sang live consistently since the promotional mall tour she did in 1998.

Most of the songs are performed over a pre-recorded track. Some critics even claim some of the tracks are the original studio versions. However, a few of Britney’s live vocals could be heard over the backing track during “Me Against the Music” and “Crazy.”

“There was a certain thrill in actually hearing Spears breathing into the microphone.” wrote Keith Caulfield of Billboard.

Many fans know the deal when it comes to Britney’s singing ability. They don’t go to a Britney show to actually hear her sing. They go for the experience. She doesn’t disappoint this time either. Most critics have praised the overall production of “Piece of Me.”

“‘Britney: Piece of Me’ is the most cutting-edge pop concert experience ever produced for Las Vegas, featuring a four-piece band, 14 dancers, elaborate sets, unforgettable costumes and state-of-the-art, never-before-seen technology,” said a press release from Planet Hollywood.

Britney has seven costume changes and a few of the changes are accompanied with wigs. Some of the looks were inspired by previous outfits she has worn, such as the nude bodysuit in “Toxic.” This is not the only blast from the past. Set pieces help recreate scenes from of Britney’s music videos as well.

Fire, rain, and even snow (made of confetti) adds to the experience throughout the show. “I got so wet,” she said to the audience after performing “Slave 4 U.” Transitions were done by showing short video interludes on large monitors. Cirque du Soleil elements of the show pays homage to the Vegas staple and follows the theme of Britney’s 2008 Circus album and tour. During “Everytime,” she flies like a winged angel and bungee jumps from a giant, rotating tree while performing “Toxic.”

Celebrities also came out to support Britney’s debut. Miley Cyrus was front and center in the audience. With a drink in her hand, she rocked out the entire show. She danced with Adam Lambert and even with one of Britney’s back-up dancers. Mario Lopez ended up crawling on his knees while Britney whipped him and performed “Freakshow.” Katy Perry and Sia were also in the audience. Both co-wrote songs on Britney’s new album, Britney Jean.

For $30 million, Britney’s Vegas residency will last two years and consist of 100 shows. The show features 24 songs spanning from the beginning of her career to present day. She even includes songs from the hidden gem, Blackout (she was not mentally able to fully promote this album, but it’s actually one of her better musical efforts). The set-list and staging is expected to change during the shows run. Tickets range from $59-$179.

It seems Britney will be able to pull this off. Critics have been nice, so far, and she’s proving that she still has some gas in the tank. However, sales for her latest album have been lackluster and the ratings for her E! documentary following her preparations for the show were poor.

Die-hard fans will continue to love Brit-Brit and they will probably be the ones cheering her on in Vegas. As part of her contract, Planet Hollywood Resort and Casino is the only place she can perform in North America during her Vegas residency. Will you be going to Britney in Vegas. Join the conversation and leave a comment below.