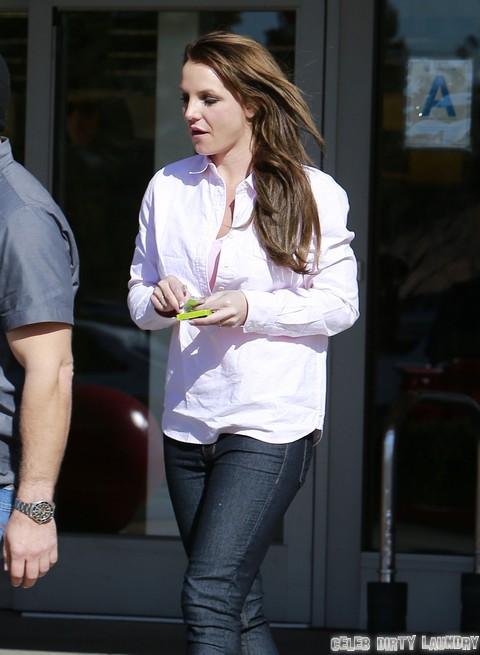 Ah, celebrity love! So romantic and compelling! This may be the strangest love triangle we’ve heard of in months—and it isn’t too far fetched for our wildest dreams! Britney Spears has become a formal acquaintance of the Kardashian family ever since Khloe Kardashian landed a co-hosting gig on The X Factor, for which Britney worked as a judge. We thought her career was on the up and up, but since quitting the show and spiltting from longtime fiancé Justin Trawick, Britney’s been spiraling downwards. Photos show her unkempt in public, and insiders say her deal for a Vegas residency is falling through because of relapse concerns. On the whole, it doesn’t paint an image of a confidant mother who has everything together. So why wouldn’t Britney turn to an all-but married man/father of two to ease her sorrows?

According to a source with National Enquirer, Britney has eyes for Kourtney Kardashian’s baby daddy Scott Disick, whom she met through coworker Khloe. Britney “fell hard” for the infamous party boy last year, and “she still fantasizes about him,” and has “plastered pitchers of him all over her bedroom walls [and] watches clips of him on YouTube.” The insider also says that the crush is nothing new, and she “first became attracted to Scott when he started appearing on ‘Keeping Up With The Kardashians,’ but she says he’s ten times cuter in person.”

Of course, the news has infuriated Kourtney, who refuses to commit fully to Scott, and is constantly nagging and nitpicking as only a privileged reality TV star can. “She doesn’t trust Scott to begin with,” the insider explained, “and has forbidden him from going anywhere near Britney.” For you naysayers, think of this: healthy people make healthy decisions and have (fairly) healthy habits. Britney Spears is not healthy. She has unhealthy habits, and makes unhealthy decisions. Her public behavior is symptomatic of a woman on the verge of a break down, and we wouldn’t be surprised to learn she is regressing into childlike behavior to cope. We just hope her kids don’t get caught up in her issues!