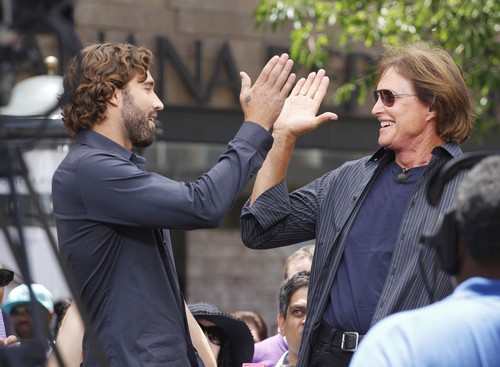 Bruce Jenner put up with his wife’s heavy drinking and rumored infidelities for more than twenty years, so what prompted him to separate from Kris Jenner now? Well, from what we are hearing, reuniting with Brandon and Brody Jenner may have made him realize that there was a real life waiting for him once he was brave enough to crawl out from beneath Kris’s thumb! According to TMZ both of Bruce’s sons blame Kris for his all but abandoning them for over a decade. In the last year Bruce decided to take the time to reconnect with Brandon and Brody as adults and that approach really has worked.

The guys even opted to be a part of Keeping Up With the Kardashians simply because it meant that they would be involved in Bruce’s life. I’m guessing that Kris never in a million years thought that they would help to convince Bruce that he deserved better than the chronic disrespect and brow beating that she dolled out on a daily basis.

Fixing things with Brody and Brandon proved to Bruce that he can certainly repair other areas of his life and reclaim the simple independence that suits him best. As for the guys, well they are obviously thrilled to have Bruce in their lives but they are even happier watching him reemerge as his own man! While the Jenner family, Kylie and Kendall included, seem to be throwing their support behind Bruce, Kris seems to be in hiding. Yeah she has claimed that they are happier apart but so far no family members seem to be helping her through this tough week.

Are you also glad to see Bruce have a chance at a real life again? Tell us your thoughts in the comments below!