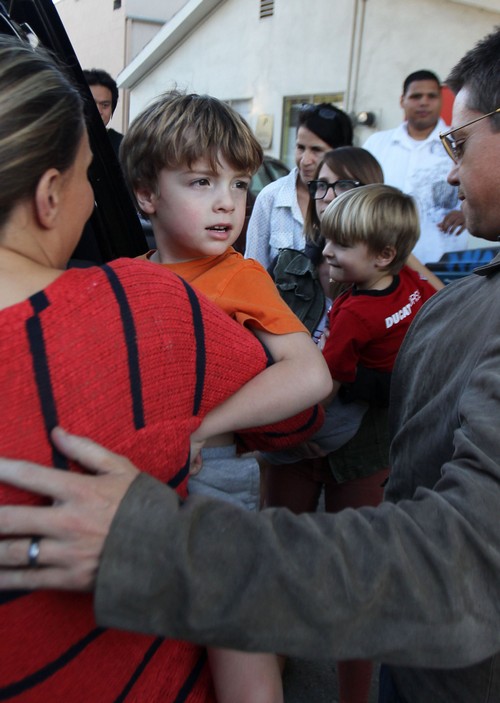 In a horrid twist of fate for the poor boys, Brooke Mueller‘s and Charlie Sheen‘s twin boys are going to be moving back in with their junkie mother from hell. Just days ago, Denise Richards, who was the boys’ de facto guardian, refused to take care of them any longer, citing their violent behavior and their regular physical and mental abuse of her own daughters. Since then, Brooke’s brother, Scott Mueller, has gotten official custody of the boys – BUT the judge claims that it was ‘important’ for the children to stay in the same school, and since Scott lives too far away, he’s given permission for all of them to move in with Brooke. In essence, Brooke pretty much has full custody of her kids.

I’m sorry, I don’t want to hate on the legal system, but what kind of idiot judge is this? He apparently also claimed that he was impressed with Brooke’s ‘commitment to staying sober’, which is completely insane when you consider that she’s been in rehab 21 times. In what universe would you allow the children to move back in with their mother when she’s been in rehab that many times!? This was a completely egregious decision on the judge’s part, and the poor children’s only hope is that their father intervenes before things get any worse.

Seriously, a change of school is not THAT big of a deal when you consider the alternative is moving in with their junkie mother. You know the minute they move in, she’s going to get back up to her old antics, and those kids are going to be wrecked for life.

New pictures released today show Brooke picking up the twins, Bob and Max, from their school today – which means that not only are the boys living in her house, but she’s now responsible for day-to-day activities concerning them. How long will it take before she goes back into her cycle of addiction, and drives the kids while drugged out of her mind? It’s not even a matter of responsibility – the kids will be in actual physical danger as long as they’re with her, and I cannot believe the legal system would allow this to happen.

What do you guys think? Do you think Brooke will manage to keep custody of her boys via her brother? Or will Charlie manage to save the day? Let us know your thoughts in the comments.

Charlie Sheen’s ex-wife Brooke Mueller picks up her sons Bob and Max from school in Los Angeles, California on November 8, 2013. Brooke Mueller’s brother Scott, has just gone to court and won temporary guardianship of Brooke and Charlie Sheen’s troubled twins Bob and Max. Although, the judge felt it was important for the kids to stay in the same school, so he is allowing Scott and the boys to move in with Brooke!