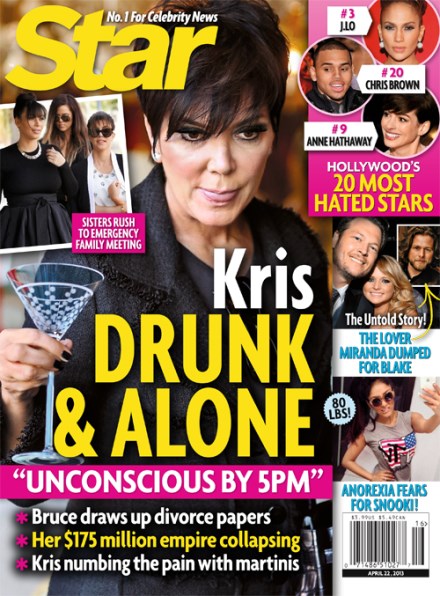 Everyone has a vice or two and it appears that Kris Jenner has gone beyond the point of being able to control hers. We have told you recently about how the momager seems to increase her liquid lunches as the stress mounts and right now Kris is often past the point of coherency by 5pm.  According to the Star Magazine, the Kardashian clan has in fact tried to stage an intervention because they all feel that Kris has been boozing way too hard- not that she’s a stranger to heavy drinking. If you’ve seen any of the quotes from Robert Kardashian’s recently released diary, he painted a picture of a pretty unlikable, self-absorbed alcoholic.

Second husband, Bruce Jenner is fed up with watching Kris’ careless behavior and is said to have had divorce papers already drawn up. It seems it’s just a matter of time before something will happen that causes Bruce to officially put an end to his miserable marriage.

Why is Kris boozing so heavily? Probably because she is watching her huge empire start to crumble. At the very least I think she’s beginning to realize that her three oldest kids won’t be under her thumb for much longer and so that means that she really has to crack the whip with Kylie and Kendall Jenner. It’s not easy to rake in millions for doing nothing and now even Kris sees that!

Also in the latest Star you can read the untold story about the guy that Miranda Lambert left in order to have a real relationship with Blake Shelton.  With all of the rumors of his infidelity I have to wonder if she would have been better off with the other guy!

Snooki has garnered lots of publicity lately for losing all of that baby weight that she put on while carrying Lorenzo. Do you think she has gone too far? Some are starting to question whether or not the reality star may find herself battling an eating disorder again. Tell us your thoughts in the comments below!