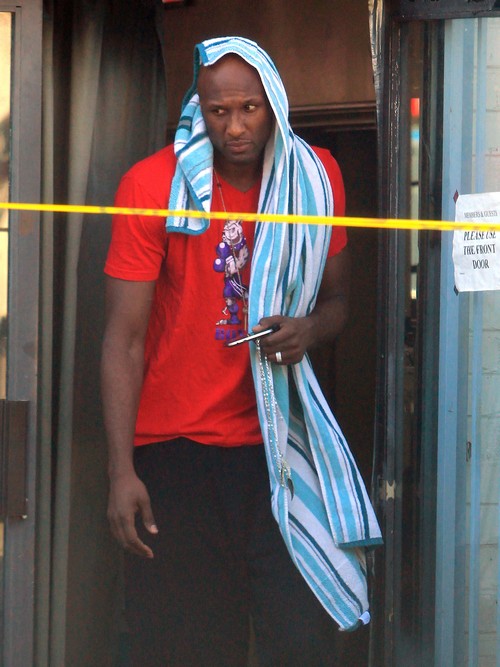 Are Lamar Odom and Bruce Jenner bonding over being banished from the Kardashian household? Or perhaps I should rephrase that to are they rejoicing over ridding themselves of the Kardashians? I can see both being true in equal measure.

According to a recent report from TMZ, Lamar has apparently been spending a lot of time with Bruce in his Malibu mansion. Apparently, they spend most of that time with Bruce ‘counseling‘ Lamar on his life and drug issues, his friends and family, and advice on how to stay clean. Apparently, since Bruce and Lamar are such BFFs now, Bruce has started telling people that Lamar is stone cold sober, and has stopped drinking or doing drugs.

Um, I don’t think anybody’s going to believe the word of a guy who seems like he’s floating through life  in a plastic surgery and prescription drug induced haze of crazy.

But regardless of the validity of his opinions, Bruce is firmly sticking by Lamar, even reportedly telling friends, “Everybody’s got s**t in their life and they need to learn how to deal with it.  Lamar didn’t deal with his very well.”

Also, even if Khloe [Kardashian] permanently pulls the plug on Lamar, Bruce claims that he’ll stay in touch with Lamar because he genuinely ‘cares for him’. So basically, he’d rather hang out with Lamar than a woman that’s practically his own daughter. Actually no, that makes complete sense. But if Khloe and Lamar do finalize their divorce and stay separate for a while, I don’t know if Bruce is going to have the freedom to stay friends with Lamar. Also, I have a feeling that one of the only reasons Lamar is spending so much time with Bruce is because he thinks it might get him closer to the rest of the Kardashians, i.e. Khloe. If he sees that there’s no chance of that, can you really see him spending all of his free time with Bruce of all people? On the other hand they are both great athletes who have been totally screwed over by Kardashian women, so why not?