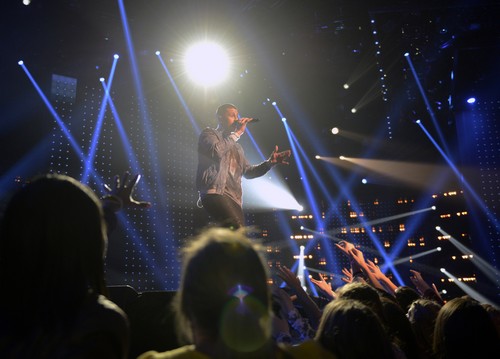 Carlito Olivero took the stage  on THE X FACTOR USA for his Top 3 FINAL live performances to impress America with his songs.  From team Paulina Rubina, Carlito Olivero sang “Impossible” originally sung by Shontelle On tonight’s show the top 3 performed live in front of coaches Simon Cowell, Kelly Rowland, Demi Lovato and Paulina Rubio for America’s vote and to be crowned the ultimate winner of The X Factor Season 3.  Did you watch tonight’s performance show? We did and we recapped it here for you.

Judges’ comments: Kelly said, “What I adore about you is your heart, you always leave your heart on the stage.  You have come a long way.”  Demi said, “I am blown away by that performance.  The criticism is you are still in your head,  the good news is this was a passion performance.  I believe you can win this.”  Simon said, “I really learned that I have to respect you.  You are the kind of contestant I respect, when you are at the bottom you pick yourself up.  You are not the best singer, but that does not matter.”  Paulina said, “For me someone who can sing salsa with all the passion in English and Spanish.  We need all the support for you tonight.”   If you want Carlito to stay around another week you have to vote for them.  Right now it is anyone’s game and it is the last chance for the acts to impress.