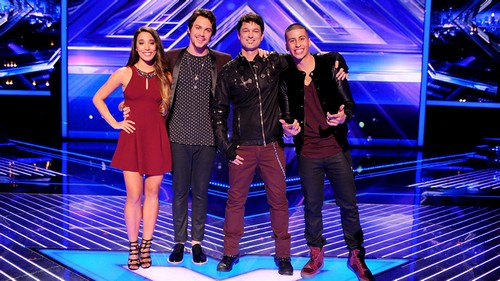 Tonight THE X FACTOR USA returns to FOX with the Grand Finale called, “Top 3 Finalists Perform.”  On tonight’s show the Top Finalists will sing for America’s vote in hopes of being crowned the winner of The X Factor season 3.   Did you watch the last episode where the finalists got to perform? We did and we have a full and detailed recap right here, for you.

On the last week’s show the fans got to pick one of the songs the Top 2 finalists performed.  The act sent home last week was Simon Cowell’s Restless Road.  If you missed last week’s elimination show we have the full recap, right here.

On tonight’s show the three final acts will sing favorite performance, dubbed as “song of the season.” The remaining hopefuls will show America their “X Factor,” will also take the spotlight for “celebrity duets,” before hitting the stage for the winner’s song, popularly called as the “$1 million song.”

Tonight’s show is going to be an exciting one, which I am not going to miss and neither should you. So be sure to tune in for our live coverage of FOX’s The X Factor USA Season 3 Top 3 Finalists Grand Finale – tonight at 8PM EST! Celeb Dirty Laundry is your go to place for all the up-to-date The X Factor News!

Tonight’s show opens up with our finalists singing “We Will Rock You” by Queen.  After the song Mario Lopez introduces the finalists and we get to go to the finalists hometowns and see the support they are getting.

First up tonight is Chicago’s own Carlito Olivero.  We get the usual sob story because X Factor thinks this is what we want to hear.  Carlito’s Mom crying, Paulina talking about he was homeless and starving.  This is not a game for him and this is for his family.  There is nothing else after this for him.

Judges comments: Kelly said, “What I adore about you is your heart, you always leave your heart on the stage.  You have come a long way.”  Demi said, “I am blown away by that performance.  The criticism is you are still in your head,  the good news is this was a passion performance.  I believe you can win this.”  Simon said, “I really learned that I have to respect you.  You are the kind of contestant I respect, when you are at the bottom you pick yourself up.  You are not the best singer, but that does not matter.”  Paulina said, “For me someone who can sing salsa with all the passion in English and Spanish.  We need all the support for you tonight.”

Next up is Alex & Sierra and they talk about how they love music.  We find out how Alex & Sierra met and how Simon first thought they were brother and sister.  Apparently Alex teared up when he found out that Simon Cowell was their coach.  Then Sierra gets kinda sappy about Alex.

Judges comments: Kelly said, “I am so happy we are able to see how far you have come.  Your vocals the way you easily go in falsetto is amazing to me.  You all sound even better now.  Any label would take you now.”  Demi said, “I am so blown away.  I listen to your live recordings on my iPod.  I am a fan.  Sierra you have come so far.”  Paulina said, “Just to see you every week with something different.  The tone of your voice is unique.  When you guys sees other, the world needs this. The love, you guys have the X Factor.”  Simon said, “It has been an honor working with you.  You are exactly the same on the show as off.  I believe I found a group that can represent America around the world.”

Jeff Gutt Detroit rocker talks about how his dream was longer than everyone’s because he auditioned last year and did not make it past boot camp.  Simon says he was the one who got away.  Jeff is a single father who has never given up on his dream.  Lots of comments about his son.  Jeff admits he does not let people in and Kelly tells him when he does it is amazing.  Jeff gets all teary [sappy] thanking Kelly.  He brought her a present, a framed pic of him and her.

Judges comments: Demi said: “That was really, really great.  You took it to a whole new level. The only problem I could not here.”  Paulina said, “Maybe we could not hear you, but they heard you very well.   You are a rock star baby I need to see a band behind you.  You are big and I really love you after that performance.”  Simon said, “For me for the first time I actually believe that you believe that you can win the show.  You are the real thing.  I think the fact that you did not make it last season well I cannot imagine a record company not signing you.”  Kelly said, ” I have one word to say to you Gutt, AMAZING!”

Next we have a forgettable performance by Paulina Rubino singing, “Boys Will Be Boys.”

Carlito Olivero is up next singing a duo with Prince Royce.  The are singing, “Stand By Me.” [VIDEO HERE]

Judges’ comments:  Kelly said, “Hand Claps all around, fine holiday fun.  I felt that was easy for you.”  Demi said, “First I thought the energy was low.  It was awesome to watch.  You showed you have what it takes to be a Latin pop star.”  Simon said, “This is what you what to be.  You were not overshadowed.”  Paulina said, “I think little by little you have been showing us.  A $1 million recording contract will change you.”

Judges’ comments: Kelly said, “You all look great, I love you I can’t help it.  It was a nice vocal.”  Demi said, “I felt like to be honest it was not your best performance.  I think Leona did a great job, you have enough to win it.  But it was not your best.”  Paulina said, “I think it was amazing performance.  I love you guys.”  Simon said, “You respected the artist.  I think it was a beautiful version.”

Next up is Jeff Gutt singing a duo with John Rzeznik – they are singing “Iris.” [VIDEO HERE]

Judges’ comments: Demi said, “That was an awesome performance, you held your own and it was awesome.”  Paulina said, “I think all these weeks you came across like a beautiful musician father.  I just remember one thing rock and roll never ages.”  Simon said, “It was the perfect collaboration and my favorite song of all times.  Jeff you did brilliant!”  Kelly said, “You really killed it, congratulations!”   If you want Jeff to win you have to vote for him.  Right now it is anyone’s game and it is the last chance for the acts to impress.

Judges comments: Kelly said, “That was even better than the first time that I heard it.  Sierra it is okay to cry.  A great performance.”  Demi said, “You never cease to not blow me away.  I am so glad that you ended this on a high note.”  Paulina said, “The talent you have traspass [sic] any border.  You are the perfect artist.”  Simon said, “You are exactly what a talent show in America needs.  Based on what you achieved throughout the competition I believe you will win. “

Judges comments: Demi said, “Jeff that was amazing. I had a moment that said I felt like it was a stadium performance.”  Paulina said, “Gutt, Gutt – I enjoyed this performance there is nothing missing you are the perfect artist.”  Simon said, “You know Jeff I am happy you sang that song.  That was the song that got it back in the competition.  You have had a fantastic night.  I wish you all the luck.”  Kelly said, “I have said it before I cannot tell you how much it has made my heart grow watching you.  America I need you get behind Jeff and vote for this incredible star.”

Join us again tomorrow night to find out who will be crowned the season 3 champion of The X Factor!