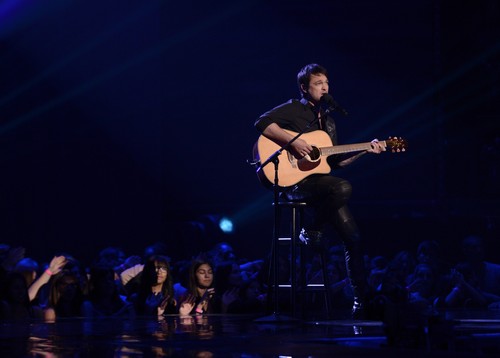 Jeff Gutt took the stage  on THE X FACTOR USA for his Top 3 FINAL live performances to impress America with his songs. From team Kelly Rowland, Jeff Gutt sang “Dream On” by AeroSmith.  On tonight’s show the top 3 performed live in front of coaches Simon Cowell, Kelly Rowland, Demi Lovato and Paulina Rubio for America’s vote and to be crowned the ultimate winner of The X Factor Season 3.  Did you watch tonight’s performance show? We did and we recapped it here for you.

Judges’ comments: Judges comments: Demi said: “That was really, really great.  You took it to a whole new level. The only problem I could not here.”  Paulina said, “Maybe we could not hear you, but they heard you very well.   You are a rock star baby I need to see a band behind you.  You are big and I really love you after that performance.”  Simon said, “For  me for the first time I actually believe that you believe that you can win the show.  You are the real thing.  I think the fact that you did not make it last season well I cannot imagine a record company not signing you.”  Kelly said, ” I have one word to say to you Gutt, AMAZING!”  If you want Jeff to stay around another week you have to vote for them.  Right now it is anyone’s game and it is the last chance for the acts to impress.