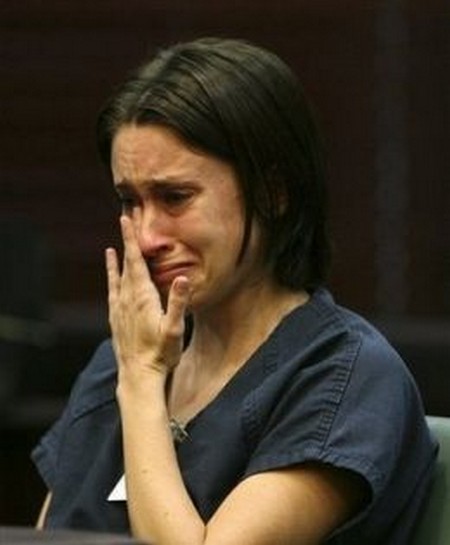 Unofficially the most hated woman in the U.S. Casey Anthony never goes away for very long, now does she? After being incorrectly acquitted of killing her daughter, Caylee Anthony, in 2011 Casey has had no choice but to keep up a somewhat low profile. Let’s face it, even if she wanted to try and get a real job it’s going to be tough to find a sucker willing to pay her. Plus she still has current legal woes and all of these things combined have caused Casey to go ahead and file bankruptcy.

In official documents that have been filed, Casey claims to have only a grand in assets and they include: Cash on hand: $474, Furniture and laptop: $200, Jewelry: $200, Clothing and accessories: $100.

So what is Casey going to do to get her hands on some fast cash? It looks like it’s finally going to be exclusive interview time for the tot mom. Apparently Casey has cooled her heels long enough and perfected her fictional facts and is ready to dish the details of her life- to the highest bidder. The question is who would be willing to pay big bucks for an interview. Last time around the big networks publicly refused even the idea of talking to Casey but will they feel that way now? Some time has passed and they may not feel like they are lining a killer’s pocket any more. Now it might just feel like an exclusive.

Editor’s Note: Would you watch an interview with Casey or is it publicity she shouldn’t have? Of course you’d watch it!!  And if by some chance you are one of the high-minded few who wouldn’t watch Casey make a bundle for a TV interview then rest assured that 10’s of  millions of others would.  It is only a matter of time before murder mom Casey Anthony cashes in on her foul deed.  And, because she was found not guilty by an idiotic jury after a ridiculous trial led by an incompetent prosecution, nobody can stop her from cashing in.  She is not benefiting from the proceeds of crime if there was no crime, right?