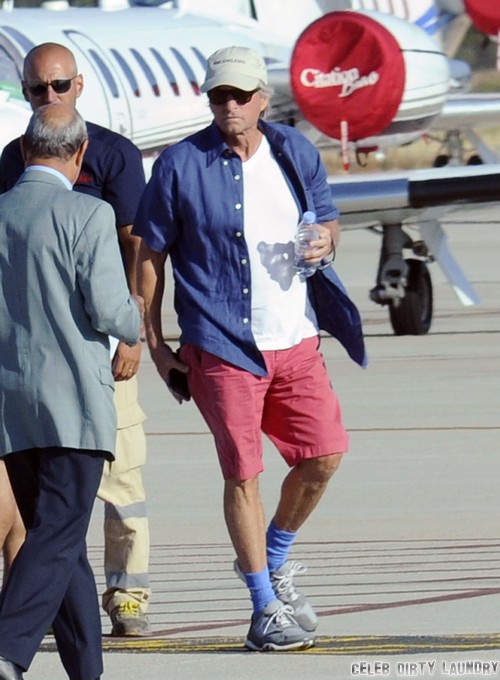 The divorce battle is on between former lovebirds, Michael Douglas and Catherine Zeta Jones and it’s not about property or cold hard cash. Instead while slowly but surely separating after 13 years of marriage these two are at bitter odds over their two children. CDL has already reported that the couple first split last year to test the waters of living apart and it seems to be the way that they are happiest.

According to the Sept. 2nd print edition of Star Magazine Michael is sick of letting Catherine call all of the shots, especially since he considers her to be pretty unstable. Her bipolar disorder has caused manic episodes that Michael can no longer suffer through and it’s a huge reason for the couples’ split. Catherine has always controlled what happens with the kids but in recent months Michael has stepped up and proven that he now intends to be a very hands on father.

Last week Michael and the kids, 13 year-old son Dylan Michael Douglas and 10-year-old daughter Carys Zeta Douglas, boarded a flight for Germany completely against Catherine’s wishes but in the end there was absolutely nothing that she could do to prevent him from leaving the country with the kids. Catherine is accustomed to getting her way and she figured that custody of the children would be a no-brainer. Instead Michael is absolutely prepared to fight her tooth and nail for the kids.

It’s funny, I always thought that these two had one of the more stable marriages in Hollywood, didn’t you? Are you surprised that they are on the fast track towards a messy divorce? Who do you think should have primary custody of the kids? Should it be a joint situation or do you think one parent is clearly more fit than the other? Tell us your thoughts in the comments below!

Editor’s Note: A few months ago a rep for the separated couple denied the divorce reports but this weekend when speaking to The Mirror about the couple’s problems and impending legal separation they would only say: “I won’t talk about that.”  After Michael humiliated his already unstable wife by saying that his throat cancer was caused by Catherine’s STD you knew that it was all over but the crying for their marriage.