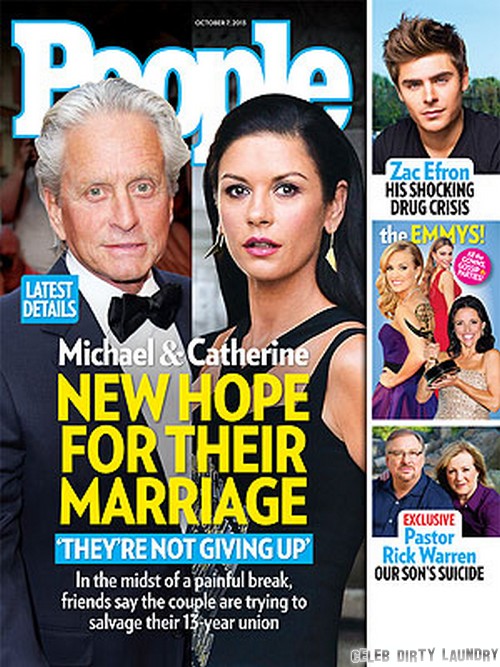 People Magazine has an exclusive report on how Catherine Zeta-Jones and Michael Douglas are ‘struggling’ to save their marriage. At least, that’s what they want you to think.

A source tells People that neither Catherine nor Michael are ready to give up on each other, despite the fact they continue to lead different lives. Obviously, ending a 13-year marriage is problematic for any couple, and the fact that they’re still wearing their wedding rings is a telling sign. However, Catherine didn’t accompany Michael to the Emmy Awards, which was one of the biggest nights of his career. But on the same hand, Michael thanked Catherine during his speech as ‘his wife’. So they’re obviously still together, but going through major problems.

A source also tells People that despite the physical distance between Michael and Catherine, they’re still speaking ‘multiple times a day’, and they make sure to stay in touch. While the recent furor over Michael and Catherine spending their birthdays apart caused a lot of consternation on the status of their relationship, People’s source explains that it’s because they’re both filming at time, not because they want to spend their birthdays apart.

Michael also spoke to People after the Emmys and he confirmed that he wasn’t giving up on his wife, explaining, “We’re working things out, talking, and we’ll see how she goes.”  Notice how he says how ‘she’ goes. Not how ‘we’ go, but ‘she’. Clearly, this is more Catherine’s choice than his, and the separation was probably her method of taking a break and figuring out what she wants. It’s obvious that they still love each other, but in Hollywood, that doesn’t ever seem to be enough.

What do you guys think? Will Catherine and Michael get back together, or will Catherine refuse to reconcile with her husband? Let us know your thoughts in the comments.