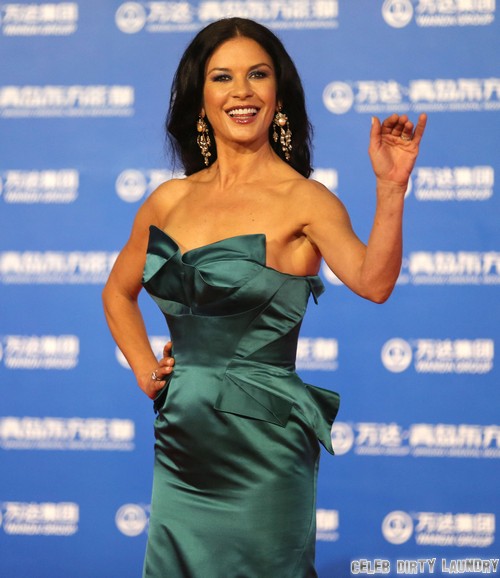 When Catherine Zeta-Jones didn’t turn up to support Michael Douglas at the Emmy Awards, it wasn’t really much of a surprise. However, he did thank her in his acceptance speech, and so it didn’t seem like their separation was as serious as the tabloids were making it out to be.

Alas, they might be right. Even if he thanked her in the speech, it might have been something he felt obligated to do. It’s been reported that Michael and Catherine will not be spending their birthdays together, September 25, and while it’s not surprising, it does point to a more permanent separation on the horizon.

A source confirms to Radar, “Michael left Los Angeles soon after his Emmys win and is back on set and working again. He will not be in New York for his birthday. He and Catherine will be spending their birthdays apart.” Catherine will reportedly be spending her birthday with her children.

Now, the timeline is interesting because just two weeks ago, Catherine was seen still wearing her wedding ring in public, and Michael had told reporters that he and Catherine ‘were fine’. But fast forward two weeks, and he’s at the Emmys alone, they’re not spending time together, and they’ll be apart for a lot longer than a few weeks. Could their ‘temporary’ separation be turning into something more serious?

A source agrees, and adds, “The birthdays is not a good sign. Then again, not even a birthday, let alone one of the biggest accolades in Michael’s life, an Emmy, could bring them back together.” Well, sure, but Michael Douglas has won an Oscar – to Catherine, I don’t think an Emmy was that big of a deal.

What do you guys think of Michael Douglas and Catherine Zeta-Jones not spending their birthdays together? Do you they will break up for good or get back together? Let us know in the comments.