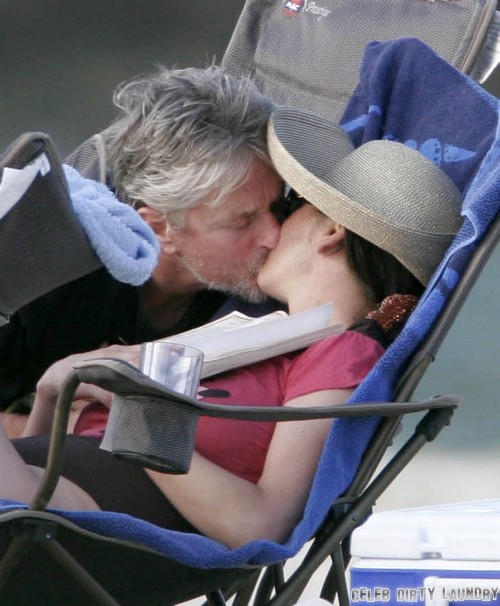 Is Michael Douglas in denial? Even though Michael and his wife Catherine Zeta Jones announced their ‘temporary’ separation only a few days ago, Michael is already denying that there’s anything wrong, and claiming that everything’s fine. So is he telling the truth or is he being delusional about the chances of his marriage surviving?

Douglas was spotted at the premiere of Behind the Candelabra in Berlin this past weekend and he was clearly still wearing his wedding ring. When he was asked about it, he simply answered, “I’m married.” He then added, “I have a crisis at home? No, I think the press has a crisis. We, we are fine. My wife and I are, are fine. We take a temporary separation, but the press… it gives you stuff to write about.”

What on earth is he saying? Did that even make sense? ‘The press has a crisis’? Really? Over the statement that HE decided to give them?

And then, is he trying to say that he took a temporary separation to give the press something to write about? Obviously, that’s not what he was saying, but his statement made absolutely no sense. I think he was just trying to make up reasons for why he had his wedding ring on, instead of simply sticking to ‘I’m married’. That was explanation enough, but by rambling on and not giving any coherent explanation, he’s mucked up any chances of clearing the air. Now, people think there’s DEFINITELY something wrong with him and Catherine, and actually, I’m now starting to think that the separation was all her idea since he seems like he’s refusing to entertain the thought. The logical conclusion of that is that he’s still in denial, and she’s probably the one who pushed for the separation in the first place.

Strangely, Catherine too is wearing her wedding ring today while chain smoking – so maybe the couple will be back together really soon. What do you guys think? Let us know in the comments.