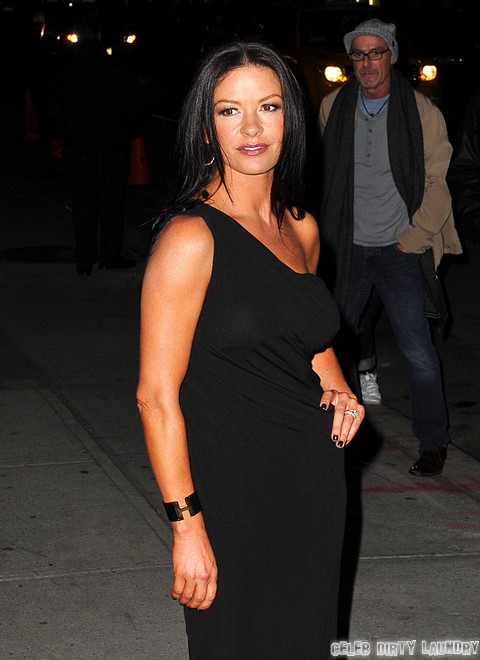 Catherine Zeta-Jones has entered a treatment center for help with treating her bipolar disorder. It was always known that Catherine had Bipolar II disorder, especially as she had completed a previous course of treatment back in 2011. This time, it’s more of a ‘proactive’ measure, according to the report, and she’s said to be going in for a 30 day treatment.

Now, there are different stages of bipolar disorders, and in Catherine’s case, Bipolar II is categorized, “by at least one hypomanic episode and at least one major depressive episode; with this disorder, depressive episodes can be more frequent and are more intense than hypomanic episodes.” The definition states that people diagnosed with Bipolar II don’t experience a ‘full manic episode’, although they will sometimes show symptoms of ‘high energy and impulsiveness’.

Now, bipolar disease is something that can be kept at bay with medication and constant maintenance. In Catherine’s case, it seemed like it was under control. She’s not had a public outburst recently – but then again, we don’t know what goes on at home. The last time she was seen out was on April 22nd with her husband, Michael Douglas, which was less than a week ago. The proactive measure part of the report makes sense because if she was stable enough to be at a party and photographed in public a week ago, then treatment is likely to prevent any future episodes rather than treat past episodes. That being said, there are a surprising number of actors and actresses who are bipolar in Hollywood, but you don’t find out because it’s kept at bay through medication and publicists making sure the information doesn’t get out. Because you see, Hollywood is effed up and having bipolar renders you a liability on set – making it less likely that you’ll be hired.

There’s also the fact that when you enter in-patient treatment for a bipolar disorder, that means that you’re usually off your meds. Yes, we saw Catherine at a public event a week ago. But almost anything could have happened in that one week. Of course, Catherine’s official statement will be that it’s a ‘proactive measure’. But if she admits that she went off her meds, that will mark her as a liability and affect  her public image. This way, Catherine is basically telling everyone that she’s got it under control, and she’s making sure to be ‘proactive’ about it. Besides, it’s an excuse to get away from her husband for 30 days.