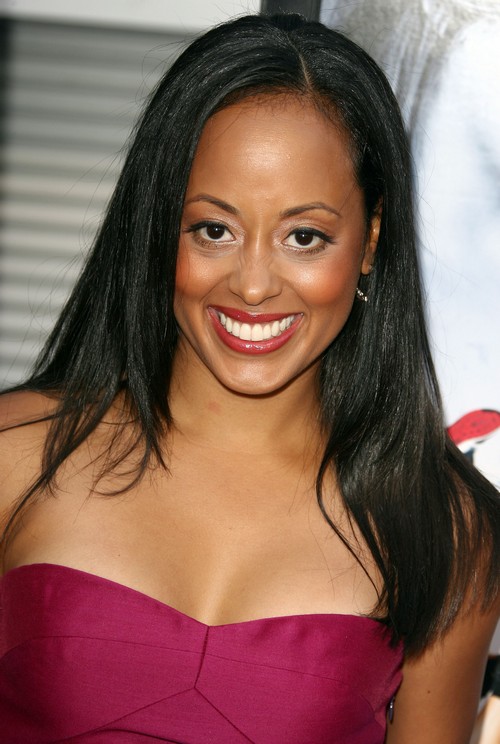 Starting out in The Cosby Show, handpicked by Bill Cosby, is sure to give you enough confidence to last you a lifetime. Essence Atkins – who played the role of Paula in the classic Cosby series – has a career that stretches decades, making her one of the most iconic actresses of our generation. Atkins is not only hysterically funny, and super talented, but she’s also intelligent, inspiring, and a comedic force to be reckoned with.

Her latest movie, A Haunted House, sends up the Paranormal Activity franchise and creates a comedic caricature of the scariest flicks of our generation. The film, being released today (01/11/2013), is described as follows:

In an outrageous send up of the Paranormal Activity movies, The Devil Inside and other “found footage” movies, A Haunted House features young couple Malcolm (Marlon Wayans) and Kisha (Essence Atkins) who have just moved in to their dream house. As they settle in, they quickly find they’re not alone. But it’s not the house that’s haunted, it’s Malcolm’s girlfriend who is possessed by a demon. Malcolm hires everyone from a priest to modern day ghostbusters to rid her of this unwelcome intruder, determined not to let the evil spirit ruin his relationship… or, more importantly, his sex life.

Celeb Dirty Laundry had the exclusive privilege to interview Atkins and ask her the all important question of what it takes to make great comedy!

He is just as funny but the thing that most people I guess wouldn’t necessarily imagine is how fun he is and the thing that I love about it, besides how creative he is, it’s just he is constantly challenging himself you know? He is not one to rest on his world and he is always pushing himself to grow as a person and as a creative being and as a father, and it is really inspiring to be around him. There’s no accident as to why he is successful. He is a product of hard, hard work and going through many, many hours and days of challenging himself to be better, pushing himself to be better, so well, this isn’t a fluke, his success is by no means, like I said you know, accidental, it is definitely by design.

He is and he is ridiculous on top of all that.  So much fun to be around and spent time with. He works long hours and works really hard and always has a great attitude.

Were there any difficulties you experienced while working on the set of A Haunted House?

Well, they took really good care of me, but when I started this movie it was literally exactly six weeks and one day after my son was born and I had to have an emergency caesarian, so I ended up doing quite a bit of my stunts. I had four stunt doubles but actually, like when you watch the trailer, you’ll see that I’m on the wall kind of, but it’s not actually a shot of me, though. I did do a lot of the stuff myself. So it’s challenging in that respect and also just being weak at times,  you know that first- I liken the experience of having a child the first ninety days like pledging at a fraternity. You’re sleep deprived and delirious. You know you kind of go through all these mixed emotions and all of that so I was feeling that having a new born at home and then being at work for thirteen hours – you know, the physical aspect was difficult.

Your career stretches decades. Is there anything you would still like to achieve in the entertainment industry?

Oh yeah of course. I just want to be keeping better and keep surprising people you know? I think a lot of people, when I did the movie Dance Flick which I also did with the Wayne, a lot of people were surprised by, a lot of people didn’t even recognize that I was wearing a wig, and they were like, “Oh gawd! I didn’t even see you, like I didn’t know that you could be so ghetto you know, so doing whatever.” I just want to keep encountering people who are surprised by my work who go, “Oh my gosh, I didn’t even know that you could do that and I didn’t expect that of you!” You know? I guess predictability is the death of an artist really.

What is your favorite medium? Why?

I love doing both. I mean TV is where I spend most of my time and I love to form a relationship with  – you know – cast, crew and it becomes like a second family away from home and when I do movies it’s kind of like I’m having an affair. My gawd I’m kind of cheating on my television family right now!

What is your dream role?

Oh my gawd, I don’t know, I love people, I love a lot of people, there’s plenty of them out there and there’s plenty of their stories that need to be told, So I wouldn’t necessarily limit  myself and say, “Oh I wanna play you know a one armed veteran who is a lesbian!”  I don’t know. I just want to tell interesting stories, so as long as I’m doing that I don’t know if there is an end game you know? It’s all about the journey.

Tell us more about your character Kisha in A Haunted House. What attracted you to the role?

Well what I love about this movie is that, as funny as it is, it’s still a story. There’s still, it’s not just a random bunch of sketches thrown together and called a movie, you know, this is still a love story and it is still a story about two people who move in together, who think they know each other, and think they are starting the best part of their lives together and then they have to deal with reality and this reality is just a little more different than what they were anticipating!

Did you watch the original Paranormal Activity?

Is it easier to act in a television show, knowing you maintain your character for more than one season?

Um no I wouldn’t say that it is easier, I think it’s a fun job when you do TV, because you really see a character evolve you know when I think about my role on Half and Half and I think about how I started at the pilot and where I was ninety one episodes later. You really need this journey as a person and I think that is very akin to real life and when you get to play a character for four years and they have an evolution, that’s really fun to explore and to talk about so I love that aspect of television. I love you get to stay and live with the character for hopefully years to come.

Throughout your career, what was the most memorable experience ever?

Oh man, I’ve had so many great experiences and I have worked with so many wonderful people, but I did a TV series for CBS called Under One Roof and it only lasted six episodes but I was away with work on location in Seatlle, Washington and James Earl Jones was my grandfather on the show and I just had the best experience on that show, telling that story. It was a one hour drama and it was such a memorable experience watching James Earl work, you know, and just seeing how fluent and effortless he made the part.