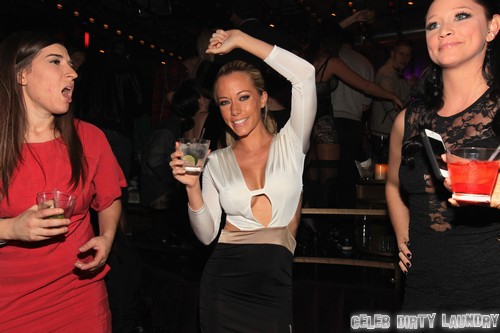 Thanks to OK! Magazine for letting us experience their annual Oscar pre-party, held at the posh Emerson Theater.  For those familiar with LA, this is one of the swankiest parts of West Hollywood, and is home to numerous pre-Oscar parties over the week leading up the awards show.

We saw TV stars such as Life Happens’ Fallon Goodson, True Blood’s Giles Mathey, and Last Man Standing’s Christoph Sanders.  All of them arrived early and stayed around the red carpet for a good while until their publicists took them inside.

We also saw Lilly Ghalichi from Shahs of Sunset, who was wearing a skintight leopard print dress and talked about how ‘proud’ she is of her big butt and skinny body.

Katie Maloney and Kristen Doute from Vanderpump Rules also stuck around and chatted, explaining that their life stayed the same despite getting famous – and they joked that they were still working as waitresses.

LMFAO’s Redfoo and girlfriend Victoria Azarenka were on the carpet for the longest, answering questions from everybody.  They talked about how they met, and it was a gush worthy moment when Victoria described their first real meeting at the US Open.  She also called Redfoo ‘Stefan’, to which he jokingly replied, “Stefan!? You see that, she called me by my real name.  You know that’s love.”  He added that he was trying to play more tennis, and he’s slowly getting better.

We also saw a glimpse of Taylor Armstrong with her new boyfriend, who we overheard calling the ‘love of her life’.

We only caught a glimpse of Kristin Cavallari as she rushed by to join her friends inside the party.  Kendra Wilkinson also turned up towards the end, but she stayed and spoke to everyone.  She also spoke about her baby, saying that he’s doing ‘well’, adding, “We went to Disneyland for the first time yesterday, it was amazing, and he was so happy.”

As soon as the carpet wrapped and everyone went inside, you could see the stars and non-famous mingling together: reality stars, television and movie stars, agents, managers, producers, musicians.  At one point, a TMZ bus stopped by the party – and a couple of people went to take pictures.  Overall, it was a great time and fun was had by all – thanks to OK! Magazine for inviting us out there, and we hope to be back next year.  Also thanks to Shari at Have u Heard for sharing!