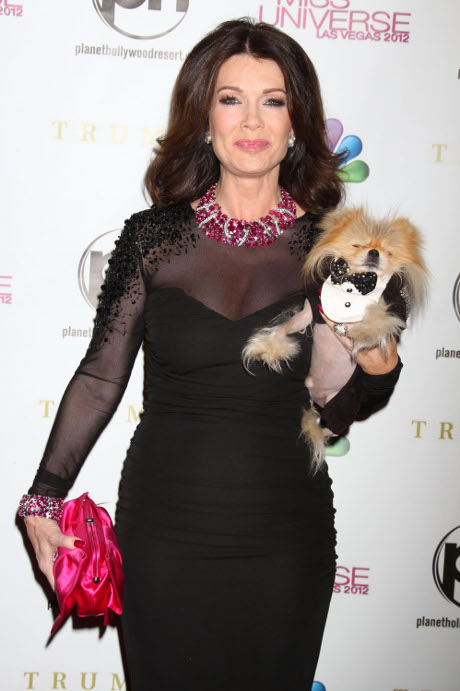 We all have a celebrity crush, but Real Housweives Of Beverly Hills and Vanderpump Rules star Lisa Vanderpump has taken hers to a whole new level. Lisa is famously married to Ken Todd, whom she seems to love dearly, as one might love a pet. The couple’s sex life is dead—despite his best efforts—and the spice of their marriage is long gone. Now, Lisa has turned her eyes on ex-bachelor extraordinaire George Clooney, and confessed she’d pick him in a heart beat!

Lisa described her obsession to Life & Style, print edition January 14, 2013. “We closed down Villa Blanca for a day for his [Mercedes-Benz] commercial shoot. We never do that, but I wanted to meet him. I couldn’t get near him though. It was so depressing!” It sounds like Lisa was left to gape from the sidelines while the internationally acclaimed hottie filmed.

Ironically, Lisa expects that “if [she] met George, [she] wouldn’t be able to speak.” So I suppose it’s for the best that she couldn’t get close to him at the restaurant! You may be thinking that it’s all very well for her to have a moderately over-developed crush on Clooney, but where does the divorce come in? Well, Lisa let slip during her interview, “I’d leave my husband for George Clooney!” Poor Ken! We wonder if she’d let him come on too, sort of as live in care for her cute dog Ziggy?

Ultimately, I expect Lisa Vanderpump’s George Clooney crush is a bit of a joke — but maybe not all that much of a joke. Ken may be a bit whiney for his tea and biscuts, but the two seem to have a great relationship with open communication and mutual adoration. Even if the spark is gone for good, they’ve got a foundation of trust and affection that will see them through several more decades together! Who’s your ultimate celeb crush? How long do you think Lisa Vanderpump and Ken Todd will last now that George Clooney has entered the picture?