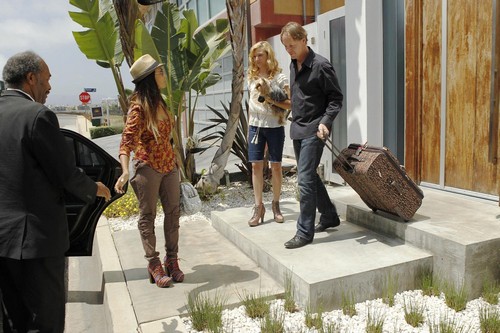 Tonight on ABC Celebrity Wife Swap returns again for a whole new episode. On tonight’s show V-Jay Downtown Julie Brown swaps lives and homes for one week with basketball star Lisa Leslie. Did you watch the last drama filled episode when Andy Dick and Lorenzo Lamas swapped Lives? If you missed the episode you can read our full and detailed recap here.

Downtown Julie Brown is best known as one of MTV’s first V-Jays with her catch phrase, “Wubba Wubba.” Julie lives in Marina Del Ray, CA with her husband, Martin, and their 19-year-old daughter, Gianna, who resides with her boyfriend nearby. Julie and her husband have a laidback lifestyle in which they enjoy life without daily schedules. In the evenings, the couple can usually be found sipping champagne by the pool.

Four-time Olympic gold medalist and WNBA All Star Lisa Leslie lives in Calabasas, California with her husband, Michael, and their two young children, Lauren (5) and M.J. (3.) Lisa and her husband have a very active lifestyle, with Lisa keeping everyone on a tight schedule, including planning all of the children’s activities. Lisa and Michael feel they are raising future pro-athletes, so the children eat a sugar-free diet, with Lisa preparing healthy, home-cooked meals that the family enjoys promptly at 6:00 p.m. each and every evening. 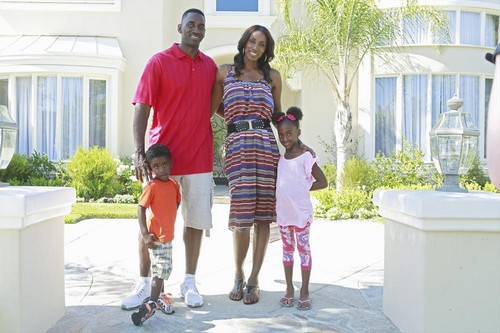 We will be covering tonight’s Celebrity Wife Swap,  Downtown Julie Brown and Lisa Leslie episode with all the details.  You don’t want to miss this episode, you never know what craziness is going to break out!  Don’t forget to come back to this spot at 8PM for our coverage of the episode.

Downtown Julie Brown is happily married go with flow mother of one. Her daughter, Gianna, who at 19 is living with her boyfriend, leaves Ms. Brown an empty nester. She’s switching with four-time Olympic gold medalist Lisa Leslie.

Lisa has much more hectic schedule. She’s the mother of two very young kids who have been put in a rigid schedule. She also is the one to do all the cooking. A point that is driven home after her husband, Michael, informs Julie that he also has family coming over.

She gets a little bit frazzled after finding out that not only should dinner be prepared by 5 but the kids are allowed to practice basketball inside the house. Julie ends up running late making dinner and gets disgruntled when she’s told she has to serve Michael his dinner. She doesn’t complain. To his face at least but can’t wondering why the women in Lisa’s family couldn’t help her with the meal or share Michael’s dinner.

Lisa on the other hand is having a hard time adjusting to having so much free time. She literally goes looking for something to do. She voluntarily makes Julie husband soe lunch and bring it to him. The rest of the day she’s enjoying herself. She gets to throw a dinner party with Martin helping her cook. She likes to entertain, something she never really has time for with small children but feels that Gianna should be there for family time.

Julie had to take the kids to all their extracurricular activities and she’s also had to work out and to end her day with a game of tennis with Michael. She’s extremely tired. But they both women get to change up the rules soon.

One of the first new rules is that Gianna has to move back into the house. She also wants more family time. That includes family dinners and having Martin and Gianna workout with her. Martin is happy. He’s been missing Gianna.

Julie’s rules change is that no more balls in the house. The children no longer have such a tight schedule. Michael immediately ignores the new rules and had the kids practicing in the house moments later but Julie manage to convince the kids that it was all fun and games so they gave back the balls. She tries to get to Michael to lighten up by taking him to brunch yet he can’t stop checking his watch.

Gianna is more open to rule change. She woke up early and participated in yoga. Martin enjoyed the time together but knows he’s not good at yoga. Gianna’s boyfriend comes by to meet Lisa. Lisa gets to tell him to take a step back in his relationship because they’re so young and he honestly listens. Whether he’ll stick with the advice is a whole other story.

Michael still isn’t taking well to change. The moment he sees the kids eating sugar he’s already thinking about how much his wife would freak out. The kids are enjoying themselves at the pizza party. They got put marshmallows on their pizza. To the end the party, Michael had to clean up.

The swap is over and the women get to return to their families.

The time at the roundtable doesn’t another notorious argument. Julie can’t help to say the entire schedule was too much. Lisa then brings up Gianna. Julie wanted Gianna to have quality time with her father but Lisa says it needs to be all three of them. They both heard what they needed to.

The women each learned something new. Julie is becoming organized and Lisa is now taking spa days. And overall the two families are still friends and recently spent the 4th of July together.