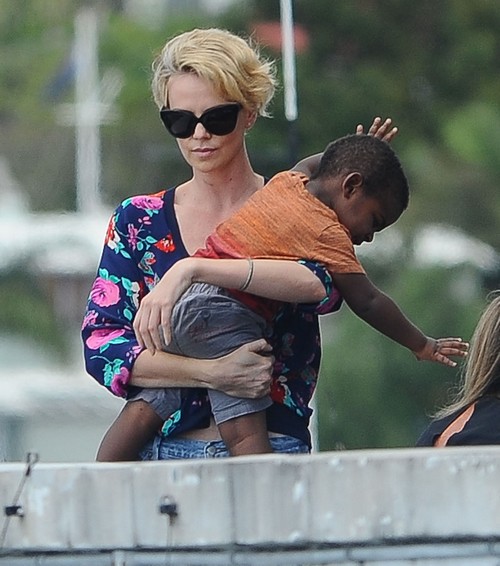 Just days after Charlize Theron was linked to Keanu Reeves, she’s now being linked to yet another celebrity, this time Fifty Shades of Grey star Luke Grimes.

A new report from Star Magazine claims that Charlize was spotted ‘getting cozy’ with Luke at a house party in Santa Monica in mid-November. Was this the same time she was supposed to be hooking up with Alexander Skarsgard and/or going on dates with Keanu Reeves? Just how many people is Charlize supposed to be dating, according to the tabloids?

Anyway, Star’s source explains that the two had ‘major chemistry’, adding, “She had her hand on his knee at one point, then seductively led him onto the dance floor, and he put his hands around her waist. [They’ve been] sending flirty text messages to each other since then.”

Eh. I’m not sure how many Charlize Theron dating stories I’m supposed to believe, since there’s just too many to name at this point. She’s been linked to Seth MacFarlane, Aexander Skarsgard, Michael Fassbender, Keanu Reeves, and Luke Grimes, and that’s just counting the past couple of months. Yes, Charlize is single for the first time in a very, very long time, and I have no doubt that she has no shortage of suitors. But just because they may have had some common friends and appeared at the same party, and perhaps even danced together, they’re dating now? That’s all it takes?

Come on. Injecting some realism into the story isn’t that difficult. Let’s go with the logical version of this story: Charlize and Luke maybe recognized each other, and maybe danced together. And maybe even flirted. The end.