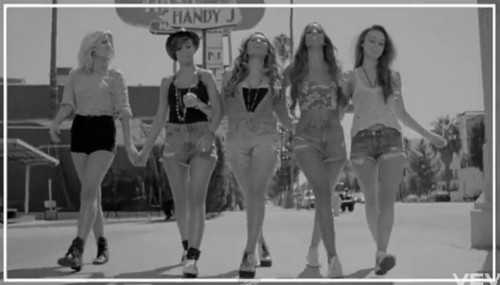 Tonight on E! the new docu-series “Chasing The Saturdays” returns with the second episode of its premiere season called, “SatsCriesAndVideotape”  On tonight’s show Vanessa is the center of attention when her arguing between her and her boyfriend affects the band while they produce a music video for the groups first U.S. single.  Did you watch last week’s premiere episode?  We did and we recapped it here for you!

On last week’s episode The Saturdays arrived in the U.S. and things ended up getting a little crazy while the girls got ready for an upcoming concert. The band took up residence in Los Angeles where they will live, work and play together as they expand their incredibly successful music careers and break into the American music market.

On tonight’s show the UK girl group is in LA and they are getting ready to shoot their first music video, “What About Us.” However, the weather seems to have put a damper on the moment, and the ladies are hot–but not in the way they want to be. Plus, bees decide to invade their video shoot! Meanwhile, Rochelle cannot get any sleep at night because her next door neighbors are making a commotion at night–having sex! Then, Rochelle and Vanessa deal with the emotions of having their significant others so far away from them. Will these ladies be able to handle not having their men around?

Tonight’s episode 2 is going to be exciting, and you won’t want to miss. So be sure to tune in for our live coverage of “Chasing The Saturdays” — tonight at 10PM EST! While you wait for our recap, hit the comments and let us know how excited you are about the premiere? Check out a Sneak peek video of tonight’s episode below!

RECAP: The girls finally have a day off and it’s off shopping when the girls are soon surprised at how many fans they have, young and old. Vanessa is feeling really frustrated being separated from her boyfriend. At a music video shoot, the director wants to do it as a day in the life with the girls walking around the city and ending up at a baseball field. Gary calls Vanessa while she is in the meeting and she is bumped that she can’t take the call.

It is the first day of the music video and Vanessa can’t believe how hot it is. It’s off to the pool, but not for a swim, more filming and now there are bees.  Day one is really tough because of the heat, hopefully day two is better.

Vanessa has a break down, huddled in the corner, her missing to speak to her boyfriend is really getting to her and she can’t take it anymore. Mollie finds her and tries to take care of her, then Rochelle is there too. Vanessa says she just can’t take it anymore, the other girls are upset too because they are like sisters. They tell her to enjoy the cry, it is good for her and it is not showing weakness, it just means you’ve been alone for too long. Vanessa let it all build up and then she broke down, the other girls just want to make it better for her.

Another night, another sex party next door and Rochelle calls in Vanessa who bangs on the wall to stop the racket. Vanessa takes it a step further and screams “shut up” while she bangs on the wall.

It is the second part of the music video, the dance portion and the girls start with a game of pool. Vanessa is distracted, but she is not going to let the girls down, she is going to smash this video. The girls are now in the baseball field doing their dance routine and at the end of the day, they all “do it” and put their personal issues/feelings aside.

Later that evening, Vanessa got an email from Gary and calls Mollie to tell her all about it, he bought her a vintage jacket with her name on it, he’s back in the good books.

Rochelle calls her husband and can’t believe that he is naked on the video, he tells her they should give her neighbors a run for their money.