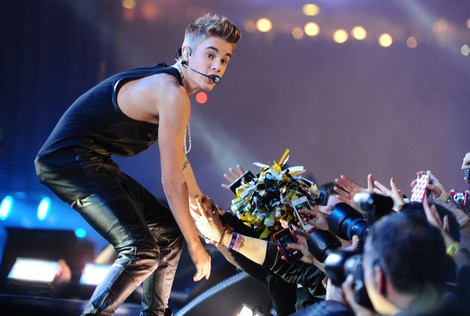 News broke today of the celebrity photographer Chris Guerra’s tragic death. According to TMZ and other media outlets, Justin Bieber’s white Ferrari was the cause of the incident. Guerra chased the car down to try and snap images of Bieber over New Year’s, but when the Ferrari was pulled over by California Highway Patrol on Sepulveda Blvd, Guerra crossed the road and was struck by an oncoming vehicle. Justin Bieber was not driving the Ferrari at the time.

Now, according to a new TMZ report, Guerra purportedly told a close colleague an hour before his death that Bieber was spotted smoking marijuana earlier the day – this is one of the reasons why Guerra chased down the car and attempted to get a money shot. If a paparazzo is able to get such a high-profile image of a celebrity in such a scandalous set-up, the image will sell for millions of bucks. Guerra’s currently anonymous colleague told TMZ that although Bieber wasn’t driving the Ferrari, he was still partly to blame for Guerra’s untimely death – Bieber has a history of reckless driving and pot smoking, so the story was a hot one to follow. We tend to disagree that Bieber had any involvement in Guerra’s death. Blaming Bieber indirectly for Guerra’s death is an absolutely silly argument – if we head down to the store while at work and get killed, we won’t blame our bosses, now would we?

Miley Cyrus hit out at Guerra on Twitter and wrote, “Your mom teaches you when you’re a child not to play in the street. The chaos that comes with the paparazzi acting like fools makes it impossible for anyone to make safe choices.” To this, Guerra’s colleague responded, “Good Christians that I know … don’t throw stones at people who get killed.”

You can have a listen to the exclusive TMZ audio call here.