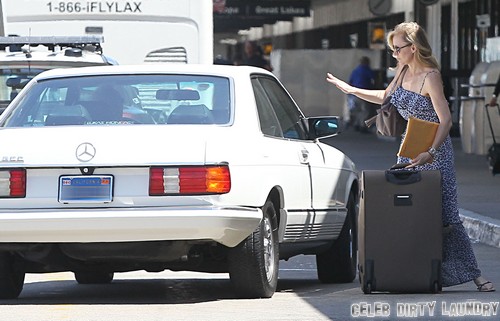 This whole Clint Eastwood saga is getting weirder and weirder. Clint Eastwood broke up with his wife of almost 17 years, Dina Ruiz [formerly Dina Eastwood]. At first, we heard stories that Dina was already moving on with a man named Scott Fisher, and he could have possibly been one of the reasons for her breakup with Clint. And at the time, we assumed it was only Dina who was seeing/saw other people.

However, just days after the divorce was announced, Clint was spotted with one of Dina’s best friends [I assume now ex-best friend], Erica Tomlinson-Fisher. So far, things are weird, but wait – it gets a LOT weirder.

It turns out that Erica Tomlinson-Fisher is actually Scott Fisher’s ex-wife. That’s right, the same Scott Fisher that’s been hooking up with Dina Ruiz. So did Clint decided to get back at his wife for [allegedly] cheating on him by going after her lover’s ex? Is he just trying to make her and Scott feel bad?

Man, I never knew Clint Eastwood had it in him. Because what other reason is there for this bizarre coupling, right? First of all, the fact that it’s just days after his divorce means he’s either been thinking about this for a while, or there was a specific reason for his behavior. Maybe he always liked Erica, but could never ask her out because of his wife. Needless to say, it’s all very bizarre and creepily reality show-esque. I didn’t think an Oscar winning actor/director would ever stoop this low.

What do you guys think of this weird wife-swap situation going on? Do you think Clint actually likes Erica, or is he just using her for revenge against his ex-wife and her new/old lover? Let us know your thoughts in the comments.