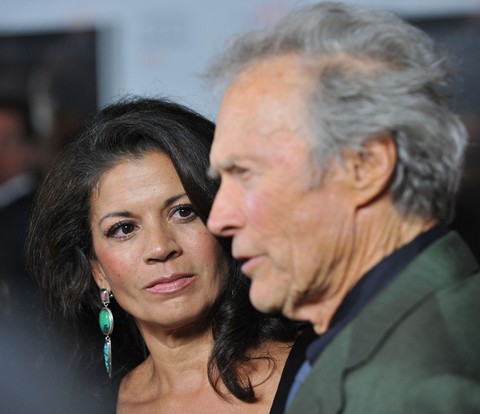 We told you guys months ago that Clint Eastwood’s marriage to Dina Ruiz had hit the skids but now more information about the couple seems to be seeping out. There have been rumors of trouble between Clint and Dina for at least 18 months now and the initial breaking point came when Dina insisted on filming a reality show for E! Mrs. Eastwood & Company bombed badly and didn’t turn Dina into the next Kris Jenner as she had hoped, but it also pissed Dirty Harry off because he truly didn’t appreciate having his families privacy invaded.

He spent time away from home because it was invaded by cameras and apparently Dina reconnected with Scott Fisher, her high school sweetheart. At first she insisted that they were both just friends but last supper Scott filed for divorced and the two got closer. According to the Sept. 9th print edition of National Enquirer Dina has made no attempt to hide her romance with super buff, 6 foot 7 Scott. She has even posted videos of the two vacationing together in Hawaii which may actually prove to be her divorce downfall.

Dina basically has now handed Clint a tool to use against her in divorce court. Many celeb prenups include clauses regarding cheating and Dina certainly makes it obvious that even though they were leading separate lives she wasn’t honoring her vows to Clint. Ultimately it may mean less money for her in a divorce settlement.

Are you surprised that Clint and Dina have split? Do you think after 17 years she just needed to be with a guy that could keep up with her lifestyle? Tell us your thoughts in the comments below!