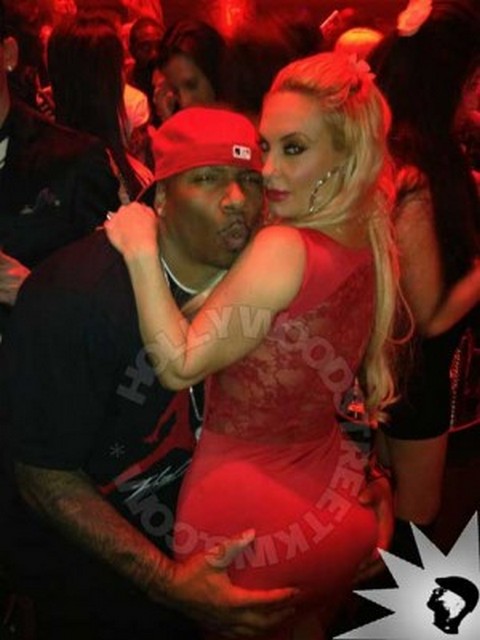 We thought she learned her lesson the first time, but apparently you can’t teach an old dog new tricks! Coco Austin recently tangled herself in a nasty sex drama when pictures of her and hubby Ice T’s rival rapper and mortal enemy A.9 surfaced. In the aftermath, Ice tweeted some pretty harsh words about her thoughtless actions, and she responded by telling fans that there was no affair, and that the matter is private! But she’s done it again! Coco was photographed in a club getting her gigantic butt groped by various men, and can’t play innocent this time! Not that anyone bought the act last time!

Diva Whispers reported that photos have surfaced of Coco in a red, lacy dress posing with at least two different guys on a night out. One was A.9’s friend, Moose Diesel! Apparently, Coco was all smiles for the camera but got serious once the photos hit Instagram! A screenshot shows her text, which reads: “Hey this is Coco,Can u please take that picture of u & I off your page.Its not a good look.Thank u.” But Moose wasn’t having any of her cheap PR saves, and texted back, “It’s not a good look for you, not me. You knew what you were doing when you took the pic.” And she can’t even say it was an unexpected photo op, because at least three different pictures exist!

Ice was very vocal about how much he was hurt by Coco last time—could this be the final straw that breaks their already struggling marriage? Coco doesn’t seem to have any physical boundaries when it comes to men–or sharing sexy pictures on Twitter with the world–and Ice hates that! Otherwise, her various grope pictures wouldn’t make him bat an eyelash! Props to Moose, for calling her out on her vixen ways! Do you think Ice should divorce her, or is third time the charm? 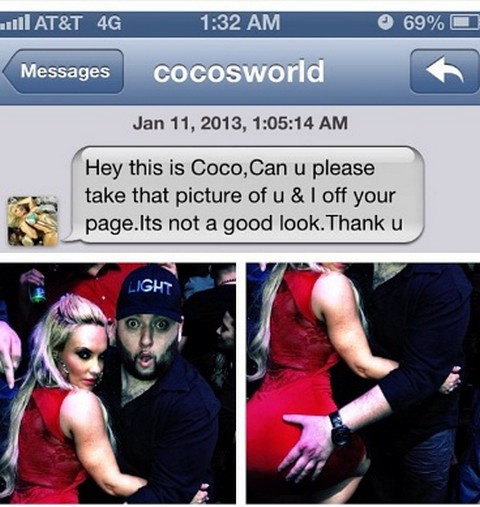