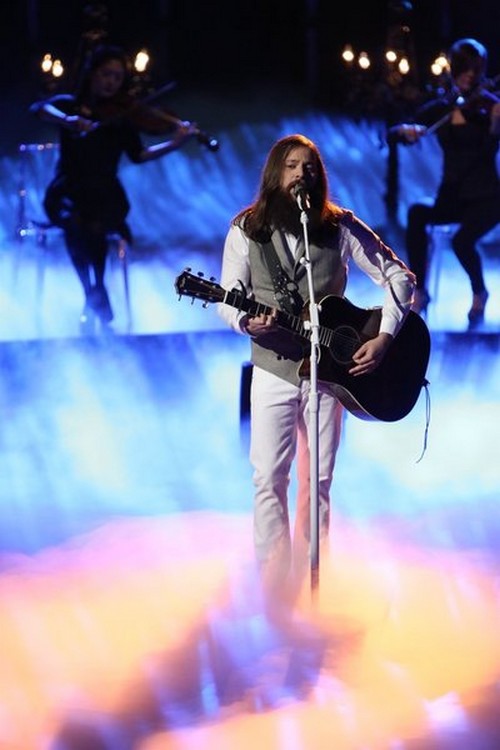 Cole Vosbury took the stage tonight on THE VOICE for her Top 6 video performance.  Cole Vosbury sang “Better Man” by James Morrison.  Tonight’s show the remaining artists from each coach, Christina Aguilera, Adam Levine, CeeLo Green and Blake Shelton team performed live for America’s vote and the chance to move on to the Semi-Finals.

Judges Comments: “Blake says that if he doesn’t get him back after that song there is something wrong; he loved how he did this song because of how he shows dimension and that he could do everything. He can sing so well and show off so much character; he respect Cole so much. CeeLo says that he agrees with Blake; it’s bitter sweet for him but still amazed to see how much he has grown. He’s also amazed with how he stops wearing his hat and is comfortable with himself now; he feels that he is so proud and would love for him to win this. Christina says that the only thing that was a little different and that he has been so consistent and has to watch out for getting a little too raspy.”  Did you see James singing “Rich Girl” by Hall & Oates tonight?  If you missed it, we have it right here for you.

On last week’s show Cole sang “Underneath it All” and the judges loved her performance.  The judges said this about her performance,  “Blake is so happy and can’t see how somebody would not like Cole; he really feels like the girls are on board for the Cole train. He loved how it was so acoustic and personal; he really nailed it. Adam says that Cole could have done the song in any way and hasn’t heard that song in so long; Adam has his heart broken knowing Cole isn’t on his team. CeeLo says he’s so proud of how far he’s come and supports him so much; he loves how open Cole is and how comfortable he is singing.”