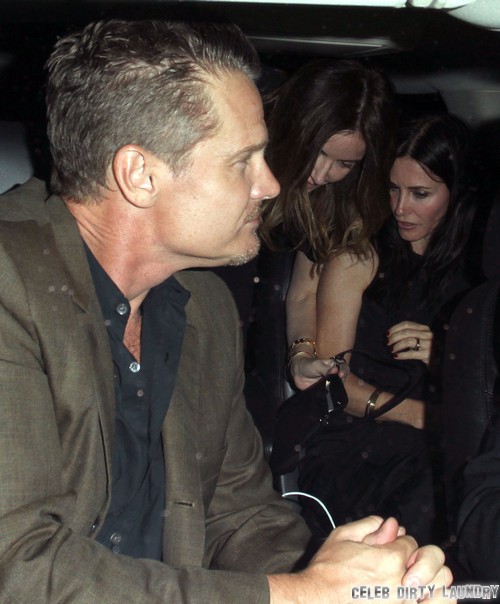 According to the latest report from Star Magazine, Courteney Cox and Brian Van Holt might be engaged. The report states that Courteney has been spotted wearing a ring on her engagement finger, with a source explaining, “They’ve had their ups and downs, but they want their relationship to last forever.”

Well, thanks for the clarification, Star. Because Courteney was wearing a possible engagement ring, she MIGHT be engaged. Cool.

Well, let the speculation abound, I guess. Courteney Cox engagement and relationship rumors are nothing new, and there’s been a lot of rumors over her relationship with Brian. It’s no secret that the way they got together is a little sketchy, but I don’t think Courteney will be so ready to dive into another marriage after what happened with David Arquette. Most sources have stated in the past that Courteney is just having some fun with Brian, and while it may develop into something serious further down the line, it doesn’t seem to be anything but fun for her right now.

Again, there are a lot of conflicting reports to how she and David broke up, but it seems to have been a stressful split, especially with David’s behavior in the aftermath. She deserves to have some fun, and I think she should be able to do without everyone jumping out with rumors of a possible engagement or wedding.

What do you guys think? Is Courteney getting married, or thinking of getting married, to Brian? In other Courteney Cox news, is she still friends with former BFF Jennifer Aniston [see how I slipped that in there]? Let us know your thoughts in the comments.