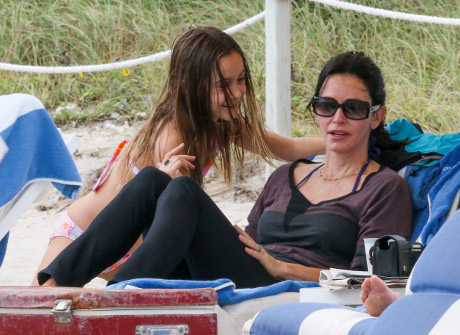 It never fails, even divorces that appear to be amicable always end up hitting a snag somewhere. This time around I’m talking about Courteney Cox and David Arquette.  The couple met on the set of Scream back in 1996 and fell hard and fast. By Hollywood standards they did pretty well and although their initial split was painful, they seem to have managed to remain on pretty good terms which is a good thing since they share custody of their daughter named Coco.

The eight year old is at the root of their recent arguments because as we all know, eventually even good parents disagree on how to raise kids. Apparently Coco wants to act and according to the latest issue of the GLOBE, Courteney is dead set against it. Her daughter supposedly does great accents and is just amazed by the whole process of acting. She is often seen accompanying her mother to the set of Cougar Town and has begged and pleaded for a chance to audition for anything and everything. Courteney refuses to budge on the issue, but David wants his daughter to have a chance to pursue her dream even if she is only 8.

David hails from a family of actors and thinks it’s only natural that it would be in Coco’s blood to want to perform so he and Courteney have had some heated clashes. His almost ex-wife is trying to protect their child from the pitfalls of young Hollywood. She doesn’t want to end up raising a young Lindsay Lohan, which is totally understandable!

Should Courteney allow Coco to audition or is it wise to shield her from the business until she is old enough to make wise choices? Tell us your thoughts in the comments below!