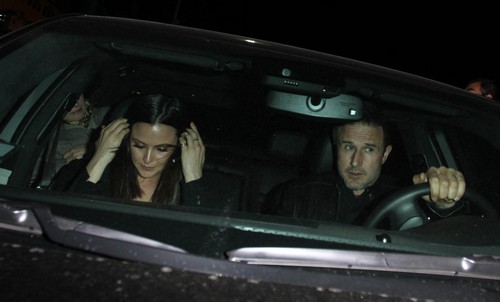 Courteney Cox and David Arquette may not have the best relationship following their divorce, but it’s not going to get any better with the news that David Arquette is expecting another child with girlfriend Christina McLarty.

A source tells Radar, “Courteney was shocked when she learned Christina is pregnant — because he’s clearly still dealing with a host of issues related to his addiction recovery. [Courtney] is having a hard time finding anything positive to say about David’s decision to have more children, especially since he’s burning the candle at both ends to be a present father for Coco and co-parent with Courteney.”

She’s certainly right on that regard, because David’s been accused of being more concerned with running his L.A. nightclub [Bootsy Bellows] than spending time with Coco. The source adds that this is one of Courteney’s concerns, explaining, “Courteney wasn’t prepared for David’s baby news and she says Coco wasn’t, either. Although they’re divorced, Courteney will never stop caring about David — especially now that he’s going to give Coco a half-sibling. She hopes he can clean up his act by the time the baby is born.”

Obviously, David and Courteney both have to remain on amicable terms because of their shared producing business and co-parenting Coco. But that being said, how will David deal with running his multiple businesses, staying clean, being a present parent to Coco, and also taking care of a newborn? That’s a lot to ask from a recovering alcoholic who may or may not lapse back into his old problems.

What do you guys think? Do you think David is prepared to take care of another child, and are Courteney’s concerns legitimate? Let us know your thoughts in the comments.