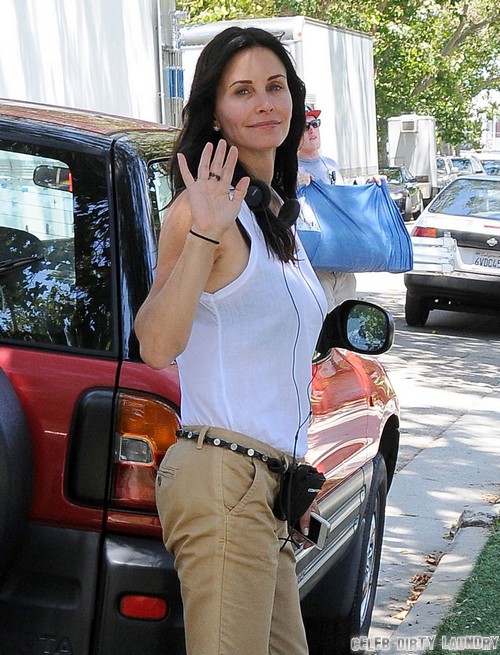 Why do celebrities do this to themselves? Don’t they understand that this level of plastic surgery is not appealing to people? Or perhaps they’re so desensitized after living in LA that they think this is attractive.

The latest victim – and I don’t use victim lightly – to this trend is Courteney Cox. She has already previously dabbled in plastic surgery, and her use of botox and lip fillers were pretty obvious to anyone who watches Cougar Town.

However, the latest pap candids[Check out a Horrifying Closeup HERE] of Courteney don’t paint a flattering image. I don’t understand how someone who looks like Courteney does would ever feel the need to destroy their face like this, but I guess the age pressure in Hollywood gets to everybody at some point. I really wish Courteney wouldn’t have gone this far though, considering that she now looks like Meg Ryan 2.0

Yes, Hollywood is open to some plastic surgery and probably encourages it, but when you cross into Meg Ryan territory, NO ONE will hire you, not even the same producers and studio executives that probably encouraged you to get it in the first place.

It’s sad and disturbing and depressing, all at the same time. When you look at pictures of Courteney back in her Friends days, you just feel a sense of nostalgia and loss, because that Courteney is long, long gone.

What do you guys think of the latest candids of Courteney Cox? There is always the chance that these were particularly unflattering photos of Courteney, but either way it’s not looking good. And considering that Courteney hasn’t landed any films roles recently, do you think her dabbling in plastic surgery is starting to catch up to her? Let us know your thoughts in the comments.

Courteney Cox calls the shots on the set of her directorial debut “Hello I Must Be Going” filming in Los Angeles, California on July 9, 2013.