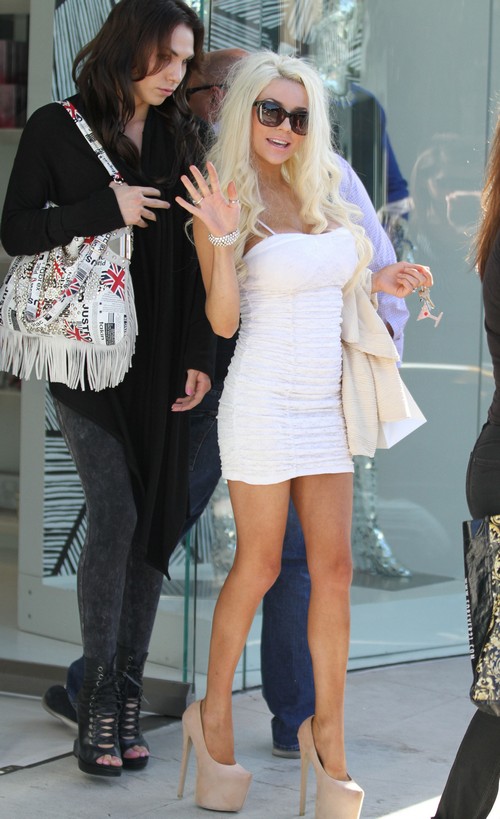 I’ll bet Doug Hutchison really regrets allowing his soon-to-be ex wife Courtney Stodden to go and do Big Brother UK, don’t you think? Once he eased up on his white-knuckle grasp on her, Courtney realized that freedom feels pretty damn good. She spent time in London making new friends, banging random guys and quite literally forgetting that her main purpose in life was to be Doug’s child bride, living blow up doll. Once he went to London to retrieve his wife the body language told us that this relationship was dunzo.

Instead of holding his wife up as she teetered in her stripper shoes Doug looked like he feared he would catch something if he laid a finger on Courtney – with good reason. They finally announced their split last week and this weekend Doug was spotted moving his crap out of the home that they once shared. He is reportedly crushed and doesn’t understand how his marriage could be failing (RadarOnline). I find that kind of funny when you consider that most 16 year old girls don’t keep the same boyfriend for more than a year or two so why would Courtney manage to keep a marriage together?

Then there’s the fact that Doug groomed and encouraged Courtney to dress like a $2 dollar hooker until he realized that she liked the attention that it draws. It was only a matter of time before some hot guy (under the age of 53) was going to drag girlfriend into a bathroom stall for 2 minutes of, whatever. Look for this split to get ugly. Marrying Courtney caused Doug’s closest friends and family to abandon him and she is no doubt going to spill lots of abusive details of how Doug controlled her, or worse.

Courtney Stodden does some shopping with friends at the Kardashian owned store DASH in West Hollywood, California on September 25 – doesn’t Courtney seem like the perfect client for the Kardashians?