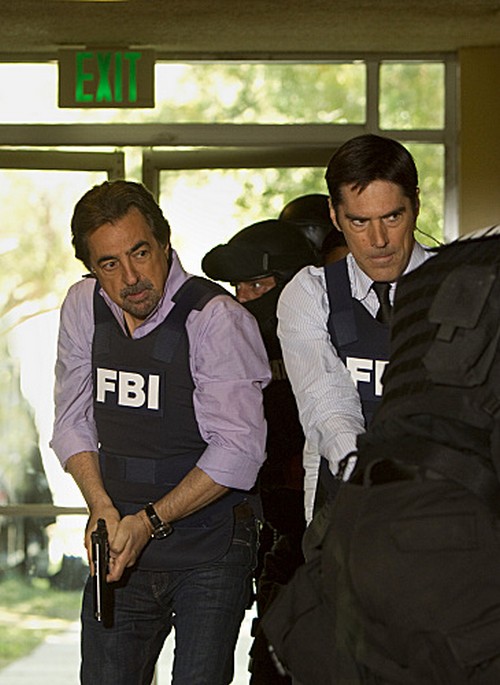 Tonight on CBS CRIMINAL MINDS continues with another new episode called, “The Inspired.” On tonight’s season 9 episode 2 a bizarre connection within the UnSub’s family could lead them to finally nab the suspect. Did you watch last week’s season premiere?  If you want to catch up before tonight’s new episode, we have a full and detailed recap, right here.

On last week’s show the hunt for a methodical killer took the BAU to Arizona to search for an increasingly devolving UnSub, and the team speculated that Hotch is in the running to be the new BAU unit chief.

On tonight’s show as the BAU zeroed in on the suspect of the ritualistic killings they’ve been investigating in Arizona, a bizarre connection within the UnSub’s family could lead them to finally nab the suspect. Guest stars include Emmy Award-winning actress Camryn Manheim as Carla Hines and Fred Koehler as her son, Wallace Hines.

Wallace’s twin brother was released. Apparently he’s twin is a paralegal. The BAU arrested Jessie. Jessie who was adopted by another family and who has only known about his twin for little more than a year. That will be around the time he went through a lot of effort to unseal his adoption records. Right before he did absolutely…nothing. There is no evidence of Jessie reaching out to Wallace at any time.

Although the BAU thinks that’s going change now that both en know about each other. Hotch believes they’ll be drawn to each other and he wants Jessie’s cooperation to find Wallace. But that’s not going to happen. Jessie wants nothing to do with the people that arrested him.

He should have listened. One brother attacked another. Who is tied up? Wallace or Jessie?

It’s Wallace that is tied up. Jessie needed some answers. He wants to know everything Wallace did and the more important question of all is why did their mother pick Wallace over him. The mother that has obviously fled the scene soon after burning any evidence of Jessie and the twins’ father.

Jessie actually wants to help Wallace. Not with his kills but to get Wallace some therapeutic help. He thought an enforced therapy session might help but Wallace is too sick. He thinks the only way he can feel better is if he kills more women. It’s why he regurgitate a sedative Jessie tried to give him. Later when Jessie unknowingly releases the restraints on an alert Wallace; a woman ends up attacked in her home.

The team caught the mother and yet she won’t give them anything. Like the father’s identity or how they might find Wallace. What she did reveal was how she chose one son over the other. It was a spur of the moment decision. Wallace had told her he loved her that day. And that was it.

Wallace didn’t run away after he was freed. Remember the woman that was murdered; that was Jessie. Wallace had figured it out. Jessie never wanted to help him. He wanted to learn from Wallace because he’s had similar urges as well. It’s not long before the agents realize Jessie was behind the recent killing. Jessie differs by not making his victims cannibals. He prefers to kill one of twins. That’s his trading card.

One of Jessie neighbors ran into Wallace. Wallace hadn’t given himself away though. She sees Jessie and tries to apologize for an earlier comment and that’s how he learned she met his brother. What does he do? He takes her into the house and both of the boys rape and kill her together.

Carla the mother evaded her police detail. She had help from Jessie’s lawyer. It seems the two did meet. The lawyer also represents the two in a trust fund. There are two beneficiaries. Jessie and the boys’ father. Their dead suffers from a psychotic break. The agents don’t even need an official evaluation after viewing Bill’s art. He painted on his wall with his own feces.

The team realize something soon after. Carla is using the boys to her own means. She wants Jessie to kill his brother and that way she can pretend to be the perfect mom again. She’s a narcissist. It’s why it was so easy to pick the child that validated her. What she didn’t realize was that Jessie isn’t that easy to manipulate.

Carla’s trap at first works. The boys meet her at the church and she’s all happy families. Just as she gives Jessie the order she realizes how wrong she was. Jessie pulls the knife on her and not Wallace. The boys begin arguing till eventually Jessie drops his mother and tries to fight Wallace. One of the boys die.

The police are quick on the scene but they don’t know which twin survived. Thankfully their father knows how to tell them apart. Jessie is dead.

Wallace tries to get his mother’s help to no avail. If she can’t have the perfect son then they’re both dead to her.