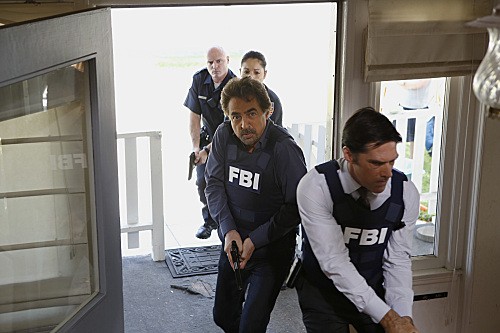 Tonight on CBS CRIMINAL MINDS returns with their season nine premiere called, “The Inspiration.” On tonight’s season 9 premiere episode Emmy Award-winning actress Camryn Manheim as Carla Hines and Fred Koehler as her son, Wallace Hines guest stars. Did you watch the season finale?  If you want to catch up before tonight’s premiere, we have a full and detailed recap, right here.

On last week’s show the BAU was called in to investigate a string of deaths in Manhattan tied to apparent ecstasy overdoses, and Hotch discovered that his estranged brother, Sean, was caught in the middle.  The Replicator zeroed in on the BAU when the killer targeted one of the team as the next victim.

On tonight’s show the hunt for a methodical killer takes the BAU to Arizona to search for an increasingly devolving UnSub, and the team speculates that Hotch is in the running to be the new BAU unit chief, on the ninth season premiere.

The season’s premiere kicks off with a car chase. Jennifer and Derek are in pursuit of a car when they stuck in the middle of a minor car accident to find a large truck heading their way. Will they survive?

Two days earlier a young couple are trying to study when they hear constant tapping on the floor. The boyfriend wants to simply ignore but the girl can’t she has a big test tomorrow and so she goes upstairs to confront to her neighbors. She runs into the owner outside. He tells her some sob story about his roommate having an out of control girlfriend. He says he can handle it so she return back to her own apartment never knowing the sound she was hearing was from obviously kidnapped woman trying to get help.

The man enters his apartment and sees his victim on the floor and decides to quiet her down using a butcher’s knife. Now the girl below can finally study.

The entire crew got called into the office. They were each doing something but no one can say no right now. Especially not to the guy working three jobs. Hotch is only doing double duty because his bosses haven’t found a replacement for the new BAU unit chief. They offered it to him but he’s thinking it over. The case he called everyone in on is for a serial killer. He kidnaps a certain type and kills the same way. Their killer is the upstairs neighbor. He just killed victim number three.

The guys have to go to Glendale, Arizona to hunt this guy down. They suspect he stalks these women and shoots them in the heart because of a rejection complex. He does seem to have one. Wallace had asked a barista out on a date but she already had a date planned so she turned him down. When he sees her walking away he begins to hear voices. Although he does try to fight these voices.

The crew had only just landed when they heard about the newest victim. They go out to investigate. Out and about, Derek thinks it’s the best time to question Rossi over Hotch’s plans. He doesn’t want Hotch to take the job. He thinks it will kill him being bound to a desk. Rossi gets him to shift his attention to the victim. This woman doesn’t fit the MO. She has brown hair and she was married. Wallace took her ring most likely for her to fit his fantasy.

There’s more about the newest victim. Emma was her name. She was married and yet she was having an affair. Could this be why the victims were all posed in a prayer position? They have Garcia look into it.

Wallace is at it again. This time it’s the barista from before. He broke in her place while she was in the shower. She tried to lock herself in but he broke down the door with the butcher’s knife.

Back with the crew the autopsy revealed that Emma had swallowed a tooth. It wasn’t her own though. So who’s it could it be? The answer is revealed when Wallace fights with the voice in his head. The voice is from one of his victims. He’s cutting up her decomposing head before he feeds it to the barista. The crew only know about three of his victims but there was a fourth and most likely first girl and he like to feed her to others.

The barista didn’t make it long. Her body was found the next day. They found his first victim’s tongue still in her mouth. They know he’s sadistic and believes he’s punishing his victims for their crimes. The shot to the heart is done because someone must have hurt him really bad. They believe he’s only starting with his games. Wallace recently bought a snake. He has plans on using it.

Wallace is still talking to the head he’s been feeding to others when he gets a visitor. His mother wants to asks if he’s seen Heather, unknown her, his first victim that has been haunting him. He begins to wig out and does his best to get rid of her.

Spencer realizes what Wallace is doing. He’s obsessed with the praying mantis. That’s why he stages the body the way he does. Also by making them partake in cannibalism he feels like he’s taking back control. The snake he got, he gave it to his praying mantis. The little creature was able to kill the snake without a problem.

While the crew have figured out his first victim is heather, Wallace suffers even more delusions. He’s creating a lot of noise battling his nightmares. The noise causes his downstairs neighbor to make another visit. He doesn’t hurt her. He warns her. The next time she knocks on her door she won’t be returning to her apartment.

The crew did a background search on Heather. She had taken out a restraining order when she was a teenager against an ex-boyfriend that flipped and was being aggressive with her. Wallace has been in and out of mental institutions. He moved away from his mother two months ago round the same time the killings started.

Wallace works in a restaurant and he’s begun cutting up pieces of Heather to feed her to his clients. Once the clients started suspected something is up with their food they, Wallace takes them hostage with a gun. He sees every woman there as Heather. He’s about to start cutting innocent women when a security officer stops him. He shoots the guy and flees the scene.

Jennifer and Derek are on a lookout in their car. That’s when they learn the suspect is in the near vicinity. They spot him and begin to chase. Reenacting the same scene from earlier the two agents are able to escape being flattened by the truck and they capture Wallace.

Everyone is heading home when Hotch tells Rossi he still hasn’t made up his mind about the job. There’s only one thing left. There was something odd about the way they brought their suspect in. He was too calm. Hotch finds out the real reason. The man they brought in doesn’t have the same finger prints as the man that committed the murders. Wallace is out there and the agents caught his twin.