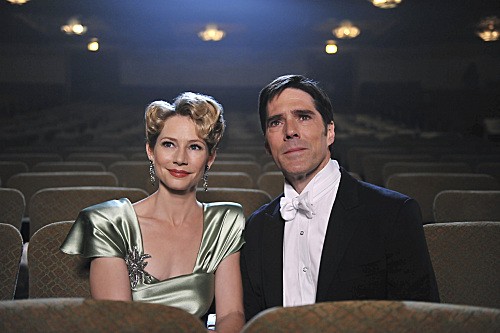 Tonight on CBS CRIMINAL MINDS continues with another new episode called, “Route 66.” On tonight’s season 9 episode 4 the BAU searches for a missing teenager and investigate her estranged father as a suspect in her disappearance. Did you watch last week’s episode? If you want to catch up before tonight’s new episode, we have a full and detailed recap, right here.

On last week’s show the BAU met their new section chief, Mateo Cruz, who, unbeknownst to them, shared a long work history with JJ. Cruz joined the team as they combed the streets of Baltimore for an UnSub who left victims unable to communicate.  Esai Morales joinrf in a recurring role as Mateo Cruz, the BAU’s new section chief. David Anders guest starred as Anton Harris.

On tonight’s show As Hotch fights for his life due to complications from his stabbing at the hands of George Foyet, a.k.a. “The Reaper,” he experiences visions of his late wife, Haley, and his nemesis, Foyet. Meanwhile, the BAU searches for a missing teenager and investigate her estranged father as a suspect in her disappearance.  Meredith Monroe and C. Thomas Howell reprise their roles as Haley Hotchner and George Foyet, respectively.

Tonight’s episode opens up on a young woman making out with her boyfriend. Although he wants to do more than make out. When begins to get aggressive, she fights him. When that fails, suddenly, someone pulls him from the car and begins to pummel him. Her savior was her dad.

The young girl’s name is Samantha and she hadn’t seen her father in several years. He’s an ex-convict and her mother didn’t want Samantha around him. As a matter of fact she took Samantha and moved after she had gotten remarried.

By the next morning the boyfriend was found but Samantha wasn’t. They put out an amber alert on the girl and the BAU got the case because of the father’s past history. Hotch was reviewing the case with the team when he began to feel unwell. It didn’t appear to be much when the meeting started and yet he passes out before too long. Later in the ambulance, Rossi learns Hotch is suffering from internal bleeding. It’s an old wound.

Rossi knows Hotch wouldn’t want them to give up on the girl so he manages the team as they go hunting for Samantha. During their investigation they soon learn the girl was in constant contact with her dad. If what they have so far proves true then the kidnapping may have been Samantha’s idea. Why else did she willingly ditch her cell phone.

It actual was her idea. She hated the small town her mom moved her to but her father wasn’t supposed to have come for her this early. She never got a chance to say goodbye to her friends. However her dad puts her in a better mood by talking about their new home and how wonderful it will be. What she doesn’t suspect is that her dad is more lethal than she thought.

They were spotted getting gas at a station. Her father diverted her to get the store clerk alone. He had noticed how the man watched him while on the phone. It was an easy guess that he was being reported in. Instead of fleeing the scene; her dad kills the clerk.

Hotch’s internal bleeding was caused when he got knifed by a serial killer. It seems he didn’t fully checked out afterwards. Because the wound has festered he now requires surgery. Surgery isn’t much of a trial for Hotch. The funny gas has him seeing his late wife, Haley. She gives him some much needed advice on their son. Like he to say the words more and how she likes the way Beth is with them.

The kidnapping begins to get even more deadly. Samantha saw what her dad did on the news and was caught phoning her mom. She didn’t want her mother to worry but it troubled her dad that she allowed people to hone in on their location. As the BAU reports, the convict will be getting desperate by this stage. The roads are all blocked to Mexico and he won’t be able to trust Samantha anymore. Not after what she did with that call.

He went back to stealing cars. When he tried to get a new one, the owner fought him. Samantha watched her dad kill a man. Before she could have pretended he would come up with a plausible excuse on why the police think he killed the clerk but not now.

Samantha’s dad has changed his course of direction. The team doesn’t know where they’re heading and they can’t rely solely on following the dead bodies. Garcia is able to help there. She mentions how the dad went through some personal tragedy when he was young with his own father. They had taken a scenic route then. Hopefully that’s the route he’s taking now.

In the meantime Hotch’s hallucination went from a good time with Hayley to an uncomfortable reminder of George Foyet. At one point he had to watch Hayley hemorrhaging again. Whether his envisioning for closure or not is just up in the air.

The cops find Samantha and her dad. They cut him off from escaping leaving him in the worst position. Instead of handing himself in, he took Samantha hostage. For real this time. He has a gun to her head threatening to shoot if they come near them.

Jennifer acts as a hostage negotiator. She tells Eddie he has to think of his daughter. She uses her own experience from losing someone to suicide in order for him to let Samantha go. There aren’t a lot of options for him and he shouldn’t allow his daughter to see him kill himself. He lets her go but she won’t leave him. She knows what he was going to do. She convinces him to give up. No gun but simply walk out without resistance.

Hotch wakes up from surgery and the first thing he wants is to see Jack. He knows how important that relationship is after having to say goodbye again to Hayley.