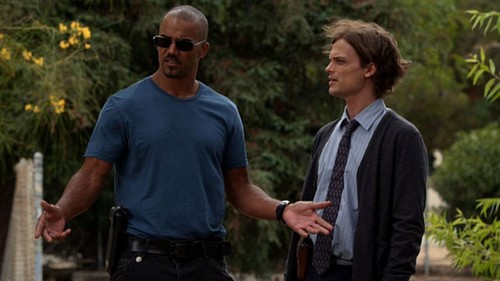 Tonight on CBS CRIMINAL MINDS continues with another new episode called, “In the Blood” On tonight’s season 9 episode 6 Garcia prepares for a “Day of the Dead” celebration at her apartment. Did you watch last week’s episode? If you want to catch up before tonight’s new episode, we have a full and detailed recap, right here.

On last week’s show as Hotch fought for his life due to complications from his stabbing at the hands of George Foyet, a.k.a. “The Reaper,” he experienced visions of his late wife, Haley, and his nemesis, Foyet. Meanwhile, the BAU searched for a missing teenager and investigated her estranged father as a suspect in her disappearance.  Meredith Monroe and C. Thomas Howell reprised their roles as Haley Hotchner and George Foyet, respectively.

On tonight’s series when the BAU investigates victims of possible ritualistic murders in Utah, clues lead them to believe that the UnSub they are looking for might have a fascination with the Salem Witch Trials. Also, Garcia prepares for a “Day of the Dead” celebration at her apartment.

The BAU are onto their next case. They were made aware of a Jane Doe that died from being pummeled by heavy rocks. The weight of the rocks signifies the killer is most likely a man and is physically fit. Her body was left in the desert. Thanks to Garcia they know the victim’s name was Gloria. Gloria used to belong to a sect but left to go live with her boyfriend. Her boyfriend is in the clear because he was out of state but the former sect has a history.

Some years ago a body of another woman was found on the sect’s property. She was honored killed by getting stoned to death. A culprit was caught in that case but the sect leader at the time was less than forthcoming. He explains himself now by saying he didn’t want to ruin all that he had built.

In different part of town a young blonde mother was taking her daughter to the library when they couldn’t check out the book they wanted. They were going to leave disappointed when a stranger tried to chat up the mom. She quickly left with her daughter but saw the same stranger later on in the day. She warned him not to come near her again but it looks like she shoulhdn’t have been worried about him. The one she should truly fear was the librarian that watched her from a far. He took care of the guy harassing her.

Back at the station the team learned their killer happens to be escalating. The second body that was found was actually the first victim. She was killed quicker than the second. It seems the more he kills then the more he treats them as ritualistic. He definitely killed the stalker using ritual. On the third victim JJ was able to find a brand. It appears the killer leaves a signature behind.

He is delusional. He strips his victims of all things that come close to modern era. It’s his way of taking them back to primitive times. The brand he uses on his victims is similar to that used during the Salem witch trials. That’s what he thinks he’s doing. He believes he’s hunting witches. When the same lady that was harassed return to the library he had stepped away for a moment. During that time the librarian on staff gave away the book he was trying to keep away from her. A book on witches and sorcery. He was infuriated that someone too his book. He suddenly saw the mother and daughter as nothing more than witches.

The killer is a descendant of the man that original brought “witches” to justice. Learning his lineage might have been what triggered his delusions. The team tracked the killer, Leeland back to library he volunteered at but it was too late. He had knocked out the woman that gave away his book. Whoever checked out the book on witchcraft he found guilty of being a witch. However his latest victim is smart. She play along with his fantasies. She went as far as to admit to witchcraft and was smart enough to claim her daughter’s birthmark meant she was touched by an angel. He releases her daughter and yet sets a time for her execution. Although at the last minute he changed his mind about letting the little girl go. He said witchcraft was in the blood.

He was going to set the mother on fire when the agents finally arrive. He tried to pretend they were only delusions but the bullet he got sure must have felt real. He died out there while the mother and daughter got to live another day.

In a way to remove themselves from the last couple of days they all joined in for Garcia’s day of the dead celebration. Each of them brought in gifts for loved ones on the other side. It’s a way to honor the dead and remember them fondly.