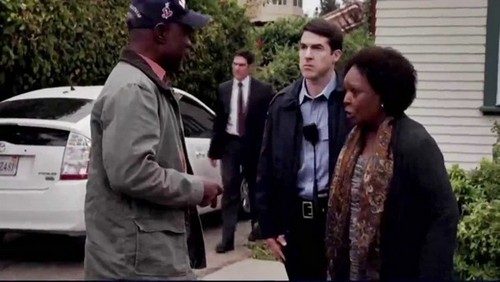 Tonight on CBS CRIMINAL MINDS continues with another new episode called, “Strange Fruit” On tonight’s season 9 episode 9 the BAU unearthing family secrets rooted in the past racial divisions in the South.  Did you watch last week’s episode? If you want to catch up before tonight’s new episode, we have a full and detailed recap, right here.

On last week’s show when teenagers who were reported missing were suspected of a series of mass murders in Chicago, the BAU investigated their whereabouts to find a motive for the crimes. Also, Morgan had conflicting feelings when his girlfriend took her job at a hospital as seriously as he took his.

On tonight’s show when skeletons are found in the backyard of a Virginia home, the BAU centers its investigation on the family living there, unearthing family secrets rooted in the past racial divisions in the South.  Esai Morales returns as the BAU’s Section Chief Mateo Cruz. Guest stars include L. Scott Caldwell (“Lost”), Emmy Award winner Glynn Turman (“In Treatment,” “House of Lies”) and Seth Gilliam (“The Wire”) as Tina, Charles and Lyle Johnson, respectively, the family who owns the house the BAU is investigating.

A lovely young couple named Mike and Cheryl heard a boom go off outside of their house. Taking precautions they had in fact called the police. Funnily enough it wasn’t a bomb. It was merely a busted water pipe. The city workers come out but they need to enter the couple’s neighbors’ yard. They said go ahead. Their neighbors are always so helpful they wouldn’t mind. Well someone will mind now. The worker found skeletal remains in the Johnson family yard. The wife doesn’t know where they come from and hones in on her husband when he arrives. He doesn’t know what she’s talking about but the other man in his truck suddenly makes a run for it. Which would have been smarter if the BAU weren’t already on the scene. Hotch easily catches him.

The Johnson family are all taken into custody and split up. Their son Lyle swears he and his family didn’t kill anyone. He only ran because he didn’t want the government to pin anything on him. He tends to believe the government is always willing to charge a black man for the nearest crime. It’s why he’s giving nothing but mouth to Hotch during interrogation.

But the team found a lot even without Lyle’s help. They know the victims were women killed nearly 10 years ago and they all are around Lyle’s age. They were also mutilated.

Lyle is looking like the best suspect. His dad was always doing renovations at the house. He’s a contractor and his home was his hobby. Lyle eventually joined the family company. Growing up Lyle was always unhappy. He raised his hand and the teacher didn’t pick him. He asked a girl out and she’d laugh at him. Afterwards he would sit in his room and sulk. The team wants to know why his parents never got help for his depression when it’s revealed Lyle’s father didn’t believe in that. Charles Johnson said Black people don’t have to be depressed. He chose to push his son into working over talking about feelings.

Forensics was able to identify one of the victims. Her name was Marianne and after they showed her picture to Lyle, he claimed to never knowing her. Reid and Blake soon learned that was a lie. They his secret compartment in his room. Inside was a box with a photo of Marianne and testosterone pills. If Lyle was high on adrenaline from the pills then it could easily explain what pushed him into killing. Two agents hound Lyle with the picture of Marianne until he confesses to killing her.

Yet the team no longer thinks Lyle killed those women. Not when they found the remains of man killed 35 years ago. Lyle tried to confess o it but he would have been 5 when the crime occurred. It wasn’t him that committed all of these crimes. The BAU suspects Lyle only confessed because even he suspects his dad of being a killer.

Charles has been taking testosterone. As a matter of fact Lyle might have simply stolen some pills from his father. He doesn’t sleep in the same bed as his wife anymore so why would he need those pills? Did he need the pills to give him an edge?

Charles’s room is shrine to the past. He’s very big on saying how unfairly Black-Americans are treated till this day. Marianne may have been Lyle’s girlfriend at the time of her death but she was also white. Marianne’s father and the man that was buried alongside her used to be friends. They were both part of a chapter of the Klan in Charles’s hometown. Charles grew up with Klansmen. He has a deep inante hatred for them still.

JJ wonders why the family hasn’t lawyered up yet. Hotch tells her that Lyle and the Mrs. Know their innocent but Charles is a sociopath. He thinks he talk his way out of it all. Rossi needed to rile Charles out of his comfort zone. The best way to do that was to tell him a story from his own childhood when he had to lock a kid up in the locker after getting pressured. Rossi then goes on to say his “friends” made him urinate on the kid in the locker. The story serves its purpose. Charles is no longer laughing off the possible charges. He’s too busy hating Rossi.

Morgan doesn’t want to hear Rossi explain but Rossi informs him that he was only working Charles. Rossi got Morgan to go in but Charles refuses to work with him. He wants Rossi back.

The team finally found a connection between Charles and all his victims. One of the Klansmen had a sister that went to school with Charles. She died a couple years after but she left behind a deathbed confession. She told a lie about Charles. She told her brother and his friends Charles raped her because she didn’t want to admit she was fooling around with a guy past curfew.

The Klansmen snatched Charles off the street that night and they cut him. They did more than cut. They castrated him and that’s why he has to take testosterone. He originally wanted a large family. Lyle isn’t even his son. Still only four bodies were recovered and it was six men that butchered Charles. Rossi got him to admit where the other bodies were and to confess. He told Charles that it would be best for Lyle. Although he didn’t get Charles’s genes, he got his rage.

Afterwards Rossi was getting ready to leave the building when he stopped by his locker and remembered when he stuffed that kid inside once many years ago.