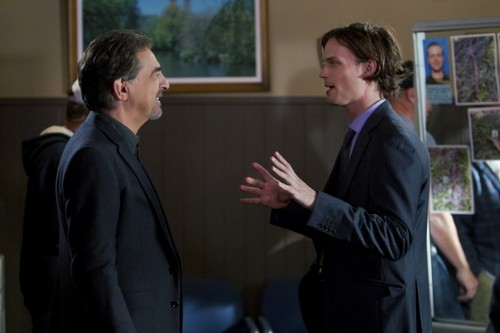 Tonight on CBS CRIMINAL MINDS returns with a new episode called, “Nanny Dearest.” On tonight’s show nannies and the children they care for were being kidnapping on the same day each year. Did you watch the last episode before the hiatus? We did and we recapped it here for you!

On last week’s show the BAU traveled to Rapid City after two male victims were discovered murdered in a ritualistic manner. Also, Reid continued to grieve over Maeve’s death.  He was having trouble coming to terms with her death.

On tonight’s show the BAU travels to Los Angeles looking for an UnSub who is kidnapping nannies and the children they care for on the same day each year.

Every year on May 13th in LA a nanny is kidnapped. The child that they watch is safely returned to a church, but the nanny ends up sexually tortured for days before being scalded in a bathtub.  The BAU is trying to be preemptive this time around but of course a nanny is snatched. While walking her 2-year old she hears cries coming from a minivan. She stops at the car and opens the door to rescue the baby, only to find that it’s a trap, a recording playing on loop. Of course a guy grabs her and drags her into the van. Gina Mendez is now missing with little Phoebe.

Only one person has ever survived this UnSub and she isn’t feeling strong enough to be of any help. Usually this guy returns the child withing 24 hours but Phoebe needs special medicine or she will die so the BAU are frantically racing to find him. They realize he is consistently compassionate to the children that he abducts so Phoebe’s parents appeal to him to bring her back.

Tara, the only surviving victim sees the conference and decides that she will help them try to catch the UnSub. JJ and Derek put Tara in a kind of hypnotic state and take her back to her kidnapping. They take her back to that day with the hope that she will remember something important. They take her back in time and she remembers hearing a woman screaming for help but has no idea who it was. The memory scares Tara so bad that she runs out of the room.JJ reels her back in and she focuses on the other woman. She was blonde and the UnSub called her Alison. She was tied to a sink as Tara ran out the door.

The BAU figures out that Alison was in the Navy and an avid runner. Her body was found 3 years ago near a dog park. They realize that all of these abductions took place near dog parks and the bodies have bite marks. They zero things down to owners of big dogs and they find a guy named Jonathan whose 2 year old sister died on may 13th under the care of a sitter. They figure he is looking for revenge. Derek and JJ get to the house and have a gunfight  with Jonathan until a bullet ends up in his brain.