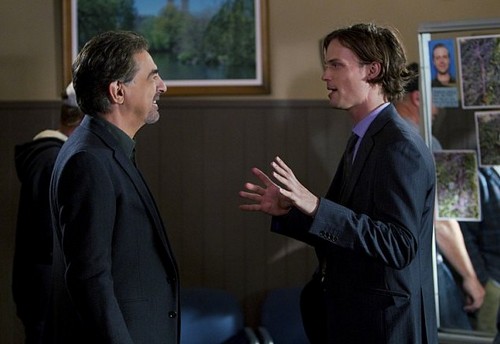 Tonight on CBS CRIMINAL MINDS returns with a new episode called, “Alchemy.” On tonight’s show Reid is obsessing over work  because Reid continues to grieve over Maeve’s death.  Did you watch the last episode before the hiatus?  We did and we recapped it here for you!

On last week’s show when a time capsule in a small Colorado town was opened 25 years later and contained a gruesome discovery, the BAU investigated that crime and a possible link to the death of a local police officer.  Pamela Bellwood (“Dynasty”) guest starred as local newspaper editor Wanda Sullivan.

On tonight’s show the BAU travel to Rapid City after two male victims are discovered murdered in a ritualistic manner. Also, Reid continues to grieve over Maeve’s death.  He is having trouble coming to terms with her death.

Tonight’s episode begins with a man in what looks like an old style hotel having a nitemare. The walls start talking to him and as he pulls back the wallpaper what’s underneath appears to be a beating heart. This guy, named Joseph Pearl eventually is found dismembered in woods near this hotel in Rapid City. There is a victim before him named Raymond Nava whose dismembered body was found near a rural Indian reservation. Both were found within hours of each other with no sexual assault. The BAU is piecing together the case at a distance before jetting off to South Dakota.

Next we flash to a girl named Tess who just so happens to work at the Red Creek Lodge and she bumps into Chad who needs a place to stay. She hooks up with him there while an eyeball spies through a peephole.

Alex, Derek and Rossi are all brainstorming on their flight, trying to search out the similarities. They also formulate a plan. Stern is in charge of the police department and that’s the first place Reid and Rossi head. She explains that the main reason their crime rate is low is because people on reservations aren’t willing to talk.  One of the bodies was found near a wolf den and there are also people around wanting to protect the animals.

The waitress at the Red Creek waits on Chad and is trying to figure out his relationship to Chad. The waitress points out that Tess is married to an invalid. Perhaps  those eyes belong to him. Derek isn’t buying that these crimes are Shamen related because they aren’t sending a clear message. They do now know that the victims were also drugged.

Speaking of drugged, Chad seems to be sucking down a little too much of Tess’s special tea and is starting to feel drugged. Tess explains that her son died and Chad passes out, right through the glass coffee table.

Hotchner is clued in to a possible third victim, a military man named Chad. The BAU spreads out to talk to the locals They realize that it’s likely a woman who plays damsel in distress. She’s likely in her 30’s with the goal of pregnancy. They realize the third vic has been missing only 30 hours and may be alive.

The waitress realizes that she hears sounds coming from room 209 and the groundskeeper tells her to ignore it. We flash to a weird dream that Chad is having before waking tied to the bed.

Blake and Jarreau realize that all of these men are from out of town so this woman in likely connected to a hotel. The waitress hears sounds coming from 209 and gets the key. Once she opens the door she is yanked inside with a scream. Her body parts are found in the woods with her body parts closer together. The BAU figures she just got in the way.

Chad is still tied to the bed and he asks why Tess is doing this to him. She tells him he has no idea what real pain is. He lives in ignorance with a stupid look on his face. Tess starts calling Chad by the name Steven and is clearly not in touch with reality. Tess walks him to room 209 where he is greated by the crazy groundskeeper. Tess finds the waitresses badge on the floor and freaks because Raul, the groundskeeper killed her. He insists that she kill Chad and she refuses. They fight while Chad fights to get his hands free.

The BAU bursts in just in time to save Chad and arrest Raul. Tess bolted out another exit and is found floating in the same lake that her son died in. Tune in for more Criminal Minds next week!