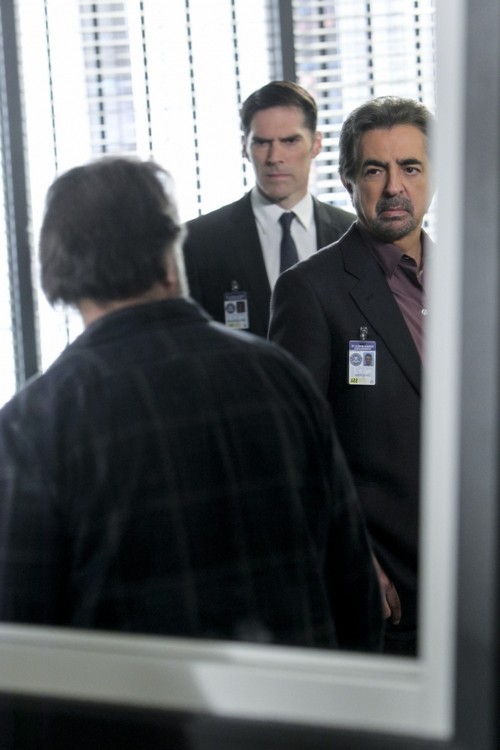 Tonight on CBS CRIMINAL MINDS returns with a new episode called, “Restoration.” On tonight’s show Skipp Sudduth returns as Captain Stan Gordinski, who helps the team with the investigation. Did you watch the last episode before the hiatus? We did and we recapped it here for you!

On last week’s show the BAU investigated victims who were documenting their personal lives and inner desires on blog posts and social media. Also, Kevin got jealous when he learned Garcia may have a new love interest.

On tonight’s show the BAU goes to Morgan’s old neighborhood in urban Chicago in search of an UnSub targeting middle-aged men, and a clue leads Morgan to believe that they are after someone connected to the man who molested him as a child.  Skipp Sudduth (THE GOOD WIFE, “Third Watch”) returns as Captain Stan Gordinski, who helps the team with the investigation, and Julius Tennon (“Lonesome Dove”) reprises his role as Carl Buford, the man who abused Morgan as a child.

These two kids convince a store owner to keep his store open so that they can get candy. Shortly after, he is viciously attacked. Morgan is renovating his place or as he calls it, restoring. Morgan gets a call that brings him to the office and alerted that two men have been killed on the Southside. Both men were beaten to death with fits of fury. Both men also had their pants down around their ankles to possibly send a message. The gang deuces that this person is filled with rage and probably just getting started.  Meanwhile, a violent man is shown in a car outside the convenience store.

Aaron thinks that the assailant is a victim of opportunity but Spencer points out that the attacker has been attacking white men thus far. They wonder if there is a sexual motive involved as opposed to race. Morgan  and Alex visit the convince store and figure out that the victim must have had some martial arts background since he put up a fight. There is another attack and this time it is against an African American male: the attacker is switching his M.O.  At the convenience store and at the alley, there is a writing that says, “Look up to the sky”.  Morgan declares that this is about Carl Beuford who is locked up in prison. Morgan says it’s what Beuford used to say to him.

Morgan says that Beuford was an expert in exploiting the vulnerabilities in adolescent boys; that after his dad died, Beuford came to be his protector and more.  Befuord built up his trust, lowered his inhibitions with wine with “Jesus Juice” and would molest him. The gang theorizes that a possible victim/attacker might be reacting out of hurt.

Morgan says the man they’re most likely looking for is a black male in his late 30; he may also have a drinking problem and picks his victim as random. Alex says he is possibly telling the world that he sees his victms as child molesters. Spencer says the attacker may have borderline personality disorder and a recent event most likely brought on this rage. Morgan says that the attacker is going after his victims after they’ve interacted with children.

Morgan and Alex try to get a list of names from another victim James but he says he is not a snitch and won’t tell. Spencer and JJ think that Beuford may have destroyed records before he went to jail while Morgan wants to go see Beuford in jail. J.J tries to get Morgan to remember more about his childhood and if he noticed any suspicious behavior involving Beuford and if any of the boys avoided him. Morgan says he always thought he was the only one. Hotch doesn’t want Morgan going to see Morgan just as they learn there has been another murder. Hotch says he’s coming with him as Morgan starts to have flashbacks of his time with Beuford.  Morgan visits Beuford in prison who has converted to Islam.

Morgan tells Beuford that four men have been killed in the neighborhood. Morgan says that Beuford is hiding behind his religion as he tries to deflect the subject. Morgan says that the U.S. Attorney is willing to give him immunity for molestation in exchange for providing all the names of the boys he molested. Morgan threatens to tell the brothers what he’s really in jail for if he doesn’t provide a full list of victims. Beuford says he wants a handshake in exchange for the list. They shake hands. Beuford says that Morgan may have him in prison but there’s a whole lot more of him outside.

The gang goes over the list and try to figure out who might fit the profile of the attacker, but the first suspect is just a junkie. Morgan offers him weed in exchange for his help. He provides details on a guy named Rodney Harris who was on Beuford’s favorite and got it the worst. Morgan realizes that Rodney is not on the list. Hotch says that Beuford played him. Rodney also had an issue with Morgan. It turns out that one of the first victims, Crawley, was killed out of revenge for molesting Rodney’s son. Rodney shows up at his ex wife’s place with a gun and attacks her new boyfriend. Morgan and the other officers show up as he has a gun trained on them.

Morgan enters the house an d tells Rodney to put the gun down. Rodney blames the new boyfriend for not protecting his son. Morgan says he knows what happened to him. Rodney then blames his ex-wife for not protecting his son from being molested. His ex-wife didn’t know about the abuse. Morgan tells Rodney that Beuford did the same thing to him and put him away in jail. Morgan appeals for Rodney not to destroy his son’s life too. Rodney puts the gun down.

Morgan tells the press that the vast majority of sex abuse victims don’t grow up to be murders and violent. He says he was a victim of Beuford. The prison men watch the unfolding press conference and then surround him.  Later, Morgan gets a call that Beuford is dead.