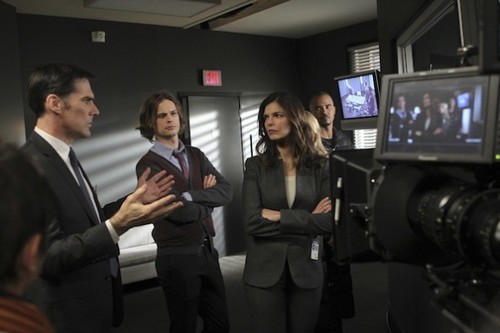 Tonight on CBS CRIMINAL MINDS returns with a new episode called, “Pay It Forward.” On tonight’s show the BAU investigates a crime with a possible link to the death of a local police officer. Did you watch the last episode before the hiatus? We did and we recapped it here for you!

On last week’s show the BAU went to Morgan’s old neighborhood in urban Chicago in search of an UnSub targeting middle-aged men, and a clue ledsMorgan to believe that they were after someone connected to the man who molested him as a child.  Skipp Sudduth (THE GOOD WIFE, “Third Watch”) returned as Captain Stan Gordinski, who helped the team with the investigation, and Julius Tennon (“Lonesome Dove”) reprised his role as Carl Buford, the man who abused Morgan as a child.

On tonight’s show when a time capsule in a small Colorado town is opened 25 years later and contains a gruesome discovery, the BAU investigates that crime and a possible link to the death of a local police officer.  Pamela Bellwood (“Dynasty”) guest stars as local newspaper editor Wanda Sullivan.

In 1988, a time capsule is put into the ground and that it will be opened in 25 years so that those in the future can know how special the city Bronsin Springs was. In the present time, the capsule is opened. The Mayor is excited as to what the past will bring them. The former Mayor says there are 20 bags to open. There is a floppy disk. However, it soon turns to horror when the head of a 23 year old man rolls out. The video has been uploaded. There is also another head found. The team tries to figure out if it’s the same killer, striking 25 years apart.

Morgan thinks it might be a copycat since the head has been all over the news.  Elsewhere, a man cleans a knife and puts another head in a suitcase.

Reid said that in Medieval times a beheading was considered a noble way to die but Morgan points out that one of the victims was shot.

Hotch and Alex try to figure out who killed Charlie Figg by talking to one of his co-workers, the sheriff.
Wade’s mother is horrified to know that her son was buried under the courthouse. His mother tells Morgan that she thought Wade had left on his own as the family suspected. She says her dead husband could be a good man but he could be very controlling and want to keep Wade close.

Rosci and Reid get to the bottom of who put what into the capsule. They talk to the photographer/writer who took pictures that day.  The former Mayor says that the photographer Wanda shamed the town’s people into good people behavior.

Garcia learns that Wade had several arrests for drunken intoxication but it was covered up.
The same saw killed both Wade and Charlie Figg. The serial killer wanted to let everyone know he was back in business.

At the town meeting, some are very antsy. The panicked cops tackle a guy who they mistakenly believe is a killer. Alex and Hotch tell the sheriff that he may have spooked the real killer. The photographer goes home but the killer is there. He shoots her!

The killer may be targeting people whose private lives don’t match up to their public images. It turns out that Wanda Sullivan was growing marijuana despite being anti drugs.

A woman asks the killer if he knew Wade since they were around the same age. He says no.  Hotch tells the Sheriff that that Charlie Figg was not the family man he claimed to be since he had two families.

The FBI says that the killer is patient, a perfectionist, and is seeking to punish hypocrisy; the capsule being opened was like an alarm clock going off for him to start killing again.

The killer gives his wife flowers for their anniversary of when they first met. They met at a restaurant where she was working as a waitress. The killer then targets a fisherman and kills him by the pond!

Rosci says all of the victims are circling back to Wade’s family.  The killer’s wife enters his man cave to tell him about dinner. She starts to look around. She finds the heads just as he comes back. He says he wishes she hadn’t seen that!

Hotch says all three victims were connected to a sexual assault. Charlei Figg was the arresting officer, Wanda omitted it and Wade was most likely did the crime. The latest victim, Baucus, witnessed the assault and called it in but a job offer was to keep him quiet. Wade’s father was also cooking the books and the team tracks down the couple who got the money. His wife says that the money was because their daughter was raped and she was only 16. She had to take pills and moved away when she was 18. The wife gives Alex a picture; it’s the last thing she has to remember of her. It turns out that the killer’s wife is their daughter!

The killer locks his wife in a room and says they will soon teach the town a lesson. However, she manages  to escape. He stops her.

The sheriff says that he found the rape file that Charlie kept at his house. He gives it to Alex and Hotch. They figure out that the killer didn’t hear about the cover up—he saw it. His name was Toru Chapman. The FBI goes to their house but they’re gone.

Tori confesses to his wife  LeAnn that he killed Wade; he wanted to give people a real snapshot of what the town was really like. LeAnn says that there’s something he doesn’t know.

Alex is suspicious of LeAnn’s statement about the rape. LeAnn says she was in love with Wade but they got into a fight that night. She was so scared of her dad finding out that she made it up. Tori is horrified, especially when she reveals her family took money. Rosci figures out where Tori is going.

LeAnn is horrified when Tori forces LeAnn to see a display of beheaded heads. He says she is worse than all of them.  Alex and Hotch get there before he hurts her. Tori says he can do 25 years and that it’s nothing.