Dakota Johnson Will Be Fired From Fifty Shades Of Grey Movie? 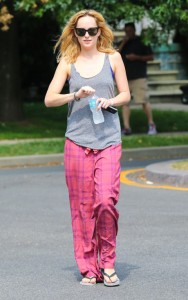 So, Charlie Hunnam has officially dropped out of Fifty  Shades of Grey. The studio’s statement makes it seem as though he had ‘scheduling issues’ because he’s such a busy actor, but let’s be real – the only thing he has going on is Sons of Anarchy. Unofficially, The Hollywood Reporter’s sources also admitted that Charlie was actually intimidated by the amount of attention he received after being cast, and he got cold feet.

This is interesting because movies of this scale always have complicated contracts involved, and his dropping out isn’t going to just affect him – it’s also going to affect his leading lady, Dakota Johnson. Dakota was always someone the studio was interested in because she was a fresh face, but one of the biggest reasons she was cast was because of her chemistry with Charlie. Fifty Shades of Grey is purely a love story with lots of sex, and without chemistry, the film isn’t going to work. And is Christian Grey, the object of millions of women’s wet dreams, or Anastasia Steele, the object of his affections, more important to the movie?

Obviously, it’s Christian Grey. To the studio and the fans, Christian Grey is a bigger priority. The fan base for the books and films consists almost primarily of women, and to them, it’s way more important that Christian Grey be gorgeous than Anastasia. Why do you think fans were so willing to protest, sign petitions, and boycott the film if Charlie wasn’t replaced?

I have no doubt the backlash played a part in Charlie deciding to quit, but it’s unfortunate that he didn’t think about his co-star. The studio and filmmakers are probably scrambling to replace him right now, and that means that Dakota should pray for chemistry with the next frontrunner for the role.

What do you guys think? Do you think Dakota will also end up leaving or get fired? Let us know your thoughts in the comments.