Dakota Johnson Regrets Fifty Shades of Grey Movie Role – Will She Be the Next Person to Quit? (PHOTOS) 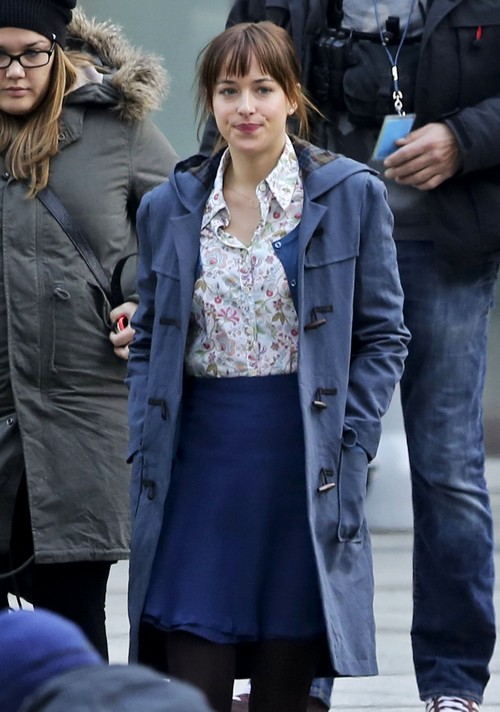 Dakota Johnson may have been bitten off more than she could chew. And Yes, I am talking about Fifty Shades of Grey but not that kind of biting. It’s the role of Anastasia Steele that has her looking like the world is against. It’s because the world is against her. A lot of people didn’t like her getting cast for the role. She either looked too old or not innocent enough. To be fair to her most people don’t know her and the ones that do only got to see her for about a minute before her show got cancelled.

She’s simply the child of two famous people right now and fingers are crossed hoping that didn’t play in on how she got the role to begin with.  She took this role thinking she’d have a different Christian Grey. Apparently her off-screen testing showed she had great chemistry with Charlie Hunnam but now that he’s gone and been replaced the focus remains more on her as the lead. Too bad for the guy that replaced Charlie but how will Dakota be able to carry this movie off?

Stills from the set show already her in a bad mood. The DailyMail reports her pensive mood was all for the cameras. We’ll slide the photos and I’ll tell you what I see. There’s a young woman with regret written all across her face. If that was her acting then oh boy is the movie in big trouble. Her regret becomes obvious as the rest of the behind the scene stills get published. The photo of her co-star intensely grabbing her comes off as more irritation than beginning of BDSM love affair. Where’s the steam? All that seen is smoke clearing.

There aren’t high hopes for this movie and with every snap of the camera it becomes more forgettable. Like the guy that replaced Charlie and whose name constantly eludes me.