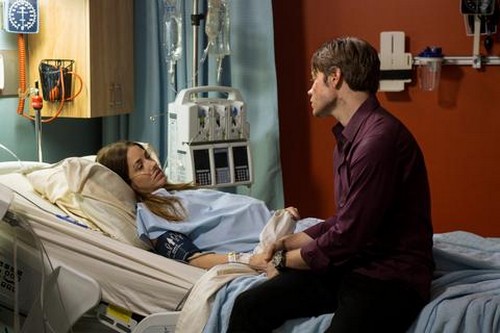 My favorite television show DALLAS returns tonight to TNT with a new episode called, “Guilt & Innocence.” On tonight’s show Emma is put in the middle of her father and grandmother’s relationship, pushing her closer to Drew, who’s wrestling with a dark secret. Did you watch last week’s episode? We did and we recapped it here for you!

On last week’s show as Bobby, Christopher and John Ross got to work on J.R.’s masterpiece, J.R.’s will had lasting ramifications for the family legacy and Southfork. Pamela proved her loyalty to John Ross by giving him information against her father, and Christopher’s relationship with Elena was tested when Christopher resorted to a tactic worthy of J.R. Meanwhile, Drew was forced to betray the Ewings when a family member was threatened, and Sue Ellen used her wits to get Gary out of Dallas.

On tonight’s show peace among the Ewings is threatened when catastrophe strikes and Christopher’s technology is believed to be the cause. As Bobby struggles to keep the family together, Sue Ellen reaches out to an old friend for help. Meanwhile, Pamela’s mother, Afton Cooper, returns to Dallas to take care of her daughter. And Emma is put in the middle of her father and grandmother’s relationship, pushing her closer to Drew, who’s wrestling with a dark secret.

Tonight’s DALLAS season 2 episode 10 is going to be very sad, and you won’t want to miss. So be sure to tune in for our live coverage of Dallas — tonight at 9PM EST! While you wait for our recap, hit the comments and let us know how excited you are about the new season?  Check out the sneak peek of tonight’s episode below!

In the aftermath of the explosion on the rig, the Ewings are coming to. John Ross is alive but scraped up. Bobby is okay. Elena and Christopher are good. But Pamela is pinned under some grating and a girder. She doesn’t look good and is holding her stomach. The hospital is treating the blast victims and they tell Christopher that Pamela isn’t stable and that they’re trying to save the babies. Sue Ellen runs in to hug them, frantic with worry. It looks like no one died, but there was a lot of smoke inhalation. John Ross sends Chris to check on Elena and says he’ll keep an eye on Pamela. Bobby finds Ann and is relieved. She begs his forgiveness and tells him she was ashamed and thought she was to blame for her daughter being

Elena’s mom and Drew show up as does Emma. Harris is there too because Judith took “a fall” and broke her leg. He tells her he just wanted to check on her. She asks him to let her know that Judith is out of surgery okay. He agrees and tells her he misses her as she walks away. Drew is miserable as he looks at his sister’s injuries. He asks if they know what happened (he sure knows!) Drew says he needs air and takes off.

Drew goes to find Harris’ henchman and he blames Drew for putting together a faulty mechanism. He tells him it wasn’t supposed to go off until that night and that it’s all Drew’s fault. The henchman tells him he needs to take off because he’s not thinking straight and just hurt a lot of people. He tells him he’s going to end up in prison or worse… He tells him to leave in the morning.

The doctor tells Christopher and John Ross that Pamela is stable and out of the woods for the moment. Pamela is watching the babies’ heartbeat monitors to make sure they’re okay. The doctor tells them that Pamela and the babies are in serious condition and she’s got an aneurism in her abdomen. They tell her if it ruptures, she’ll die. The doctor says the repair Pamela needs will put the fetuses at risk and there’s already been a placental abruption. She tells them that there’s only a 20% risk they’ll survive – she wants to terminate the pregnancy and treat her for her condition. The doctor tells Christopher she needs his permission to do the life saving surgery on Pamela if it comes to it. She says that Pamela is in shock and on pain killers and can’t make a rational choice.

Christopher is wailing and gnashing teeth and blaming himself for the explosion. Meanwhile Elena and crew are bringing in the best specialists to take care of Pamela and the babies. Elsewhere in the hospital, Judith wakes up and Harris is groveling for one more chance. He tells her that Ann was a mistake and he was weak for letting her into their lives. Judith muses that at least it brought Emma into their lives. She orders him to repair her relationship with Emma and she’ll forgive him and won’t kick him out of the family business. Emma finds John Ross in the ER and offers him some dope to relax. He declines. Harris approaches looking menacing and Emma pulls him aside to ask about Judith. Harris asks her to go see Judith and says she’s lost without her. Emma agrees and leaves with Harris while John Ross glares. John Ross heads in to see Pamela who asks him if what happened to her is karma. He tells her he would have been run over and shot if that was true. He tells her they’re going to figure it out. Pamela’s mom comes into the ICU – John Ross called her.

The explosion investigators come to the hospital and tell them that it was a methane issue. Bobby tells them to get out and they’ll contact him with their attorney. The investigator gets snippy and Bobby tells him they’re fighting for his grandchildren’s lives and kicks him to the curb. John Ross blows up at Christopher, blaming him for the explosion.

BTWs Emma’s mom is played by Audrey Landers – the vixen from the original series – and man does she look hot!

Sue Ellen reassures John Ross that she has a contact at the explosion investigators and will get to the bottom of it. Emma comes to see Judith and Judith tells her that she’s scared of Harris – she tells her that he pushed her down the stairs and tried to kill her. She tells Emma that if she will take her back to England to save her from Harris, she’ll give her the company. She seems genuinely afraid, but I bet it’s an act for Emma’s benefit. She goes nuts and they sedate her. Hmm… Harris may get her locked into a rubber room and get to keep the company after all. After Judith is knocked out, Emma tells her dad that Judith is out to get him and he says he knows. Harris gets a call and steps out. It’s Cliff. Harris apologizes that Pamela got hurt, but Cliff doesn’t care. He tells him he’s already got the explosion investigators working the case. Ann comes up looking for Emma and Harris tells her he’s sorry to hear about the explosion on the rig and he’s glad she’s okay. You know what? I don’t think he is glad…

At the local watering hole, Sue Ellen is boozing – and I mean chugging. It’s Ken, one of Sue Ellen’s old flames – and guess what? He works at TESHA – the explosion investigation branch. She’s happy to see him and flirts heavily.

Afton (Pamela’s mom) and John Ross are keeping Pamela company when Christopher and Elena come in. Afton pulls Chris out and tells him she knows he’s to blame for her daughter getting hurt and that he needs to stay away. Afton tells the doctor to save Pamela. Chris tells the doctor to save the babies. He telsl the doctor to do whatever she has to do to save the babies. John Ross and Afton are horrified. John Ross tells him if Pamela dies, it’s on him. Well duh – it’s perfect for Chris if he gets the babies and Pamela kicks it…

Everyone is waiting to see how Pamela and the babies will fare. The doctor comes and tells them that they all survived. She survived the aneurism and the babies are still in utero. Afton asks to see her daughter alone and the doctor takes her to the recovery room. Emma tries to get John Ross to go “get coffee” with her aka sex and he turns her down. She leaves and goes to Drew’s place for a backup bootie call. She tells him Pamela is okay and she dropped off her mom and Bobby at the main house. He’s packing and she asks where he’s going. He tells her it’s a short business trip for a couple of days. She asks why he’s packing everything if that’s true. He speaks to her in Spanish and says “tell me who your friends are and I’ll tell you who you are.” She says she knows who he is and it’s okay that he’s not perfect. She asks him again why he’s leaving. She reminds him that he told her you have to kick life’s ass. She kisses him.

Rachel Rowan: At the hospital, Afton’s comforting Pamela. She leaves to get her a pillow and Christopher comes in. He says he was waiting on her mom to leave so they could avoid a fight. He tells her he’s glad she’s okay and she asks if the explosion was his fault. She’s crying. He’s crying. She turns her head so she doesn’t have to look at him.

Drew wakes up naked and looks at Emma asleep in his bed and his half packed suitcases. Harris’ henchman meets Drew with his travel arrangements, but Drew tells him he’s not leaving. He tells him

Emma comes to visit her grandmother, but she’s not in the room. She asks Harris where Judith is and he says she’s somewhere safe where she can’t hurt herself. He tells her how much it meant that she had his back when dealing with Judith the day before. He tells her they’re both safe from Judith now. He kisses her on the forehead and leaves. Judith meanwhile is doped up in an ambulance. They tell her they’re taking her to a rehab facility her doctor recommended. They dope her into oblivion!

At South Fork, Bobby gets a message from investigators JR hired to find Chris’ mom Pam. He tells Ann that they found her in Abu Dabhi (maybe) – that’s where she was when her passport expired presumably with her husband at the time. Ann tells Bobby she thought he was done with Pam and he says he thought so too.

Ken comes in and finds Sue Ellen staring at a photo of JR. He teases her lightly and then gives her the preliminary report. He tells her that the methane wasn’t to blame – it looks like there were explosives involved. When John Ross and Chris get the news, they know immediately it was Cliff. Chris says he wouldn’t do it knowin

At the hospital, Pamela’s babies are in trauma and she’s screaming in pain. One of the babies flatlines and then the other! Chris and John Ross look on in horror. The babies are lost!