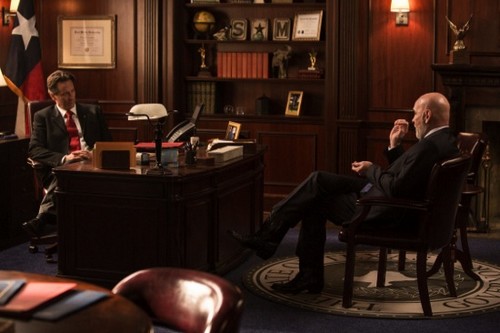 My favorite television show DALLAS returns tonight to TNT with a new episode called, “Let Me In.” On tonight’s show John Ross and Pamela bond as he helps her comes to terms with a personal issue just as Christopher and Elena’s relationship takes a turn. Did you watch last week’s episode? We did and we recapped it here for you!

On last week’s show peace among the Ewings was threatened when catastrophe hit and Christopher’s technology was believed to be the cause. As Bobby struggled to keep the family together, Sue Ellen reached out to an old friend for help. Meanwhile, Pamela’s mother, Afton Cooper, returned to Dallas to take care of her daughter. And Emma was put in the middle of her father and grandmother’s relationship, pushing her closer to Drew, who was wrestling with a dark secret.

On tonight’s show a conspiracy emerges intent on keeping Christopher to blame for recent events and to cripple Ewing Energies. The Ewings’ investigation into this conspiracy brings revelations in line with J.R.’s master plan and introduces a new adversary into the mix. John Ross and Pamela bond as he helps her comes to terms with a personal issue just as Christopher and Elena’s relationship takes a turn. Meanwhile, Ryland makes a move against Drew to protect Emma.

Tonight’s DALLAS season 2 episode 11 is going to be a great one, and you won’t want to miss. So be sure to tune in for our live coverage of Dallas — tonight at 9PM EST! While you wait for our recap, hit the comments and let us know how excited you are about the new season?  Check out the sneak peek of tonight’s episode below!

Just as things change they stay the same on Dallas. It has been years since John Ross lived at home and now that he owns half of Southfolk he has decided it’s a fine time to move back in. Christopher is absolutely gutted with guilt over the explosion and how it cost the babies lives’. He is packing up furniture and finally picks up a crib and just chucks it across the room as it smashes into pieces. He is bound and determined to get to the bottom of things and has everyone else in the boardroom the next day to try and get them on the same page.

John Ross doesn’t think that Pamela should be alone and is disturbed to hear that she sent her mother home. Christopher is spinning completely out of control. He attacks a bouncer and is fist fighting to try and get answers. He even flips on Elena and tells her that he knows she never wanted the babies anyway so she must be happy to know that she can focus on her career.

Emma’s father shows up to warn her about Drew’s laundry list of crimes. He insists that she dump him but she clearly has no intention of packing it in just yet and proves it by kissing him as her father looks on. Drew is eaten up by guilt over the explosion and is having a hard time dealing with it. Later on he is supposed  to meet her but is knocked out cold before he can even get to his car. He is dumped in the trunk of a car and  his kidnapper texts her to say that Drew has a better offer. Emma acts out by crawling all over another guy at the restaurant until her father interrupts. He tells her that because she refuses to listen he had to take other actions. He drives up to a parking garage and shows her a beaten and bloody Drew on the ground with two thugs.

John Ross contemplates leaving Pamela alone as she has asked but as he’s about to go through the door he stops and hesitates. He tells her there is more that she needs to know about the explosion.

Carlos was supposed to do a bit of footwork for Bobby to find out what J.R. Had been up to and he  has located a woman that was with him before he died. Carlos is heading to meet her now and Bobby is relieved for the possibility of answers. Carlos brings Rhonda to Bobby and she tells him that J.R. Wanted to know about the business that Ryland was doing with the cartel. They think that J.R. Realized that Ryland’s men are likely transporting something illegal across the border.

Elena sits down with Christopher and he apologizes for yelling at her, He tells her that she would have been a good mother. She sends him to talk to Pamela, to make her understand. When he gets there she tells him that John Ross told her that the rig was sabotaged and that Christopher’s technology wasn’t to blame. She begs him to find out who did it and to make them pay.

Clearly J.R, has left all of the pieces to the puzzle. Bobby, Sue Ellen and Christopher realize that if they get Pam’s shares they’ll have the upper hand. As they’re meeting Bobby receives an envelope and after looking inside he tells everyone to come with him. The governor’s office has taken control of their drilling land. Tune in next week for another episode of Dallas!